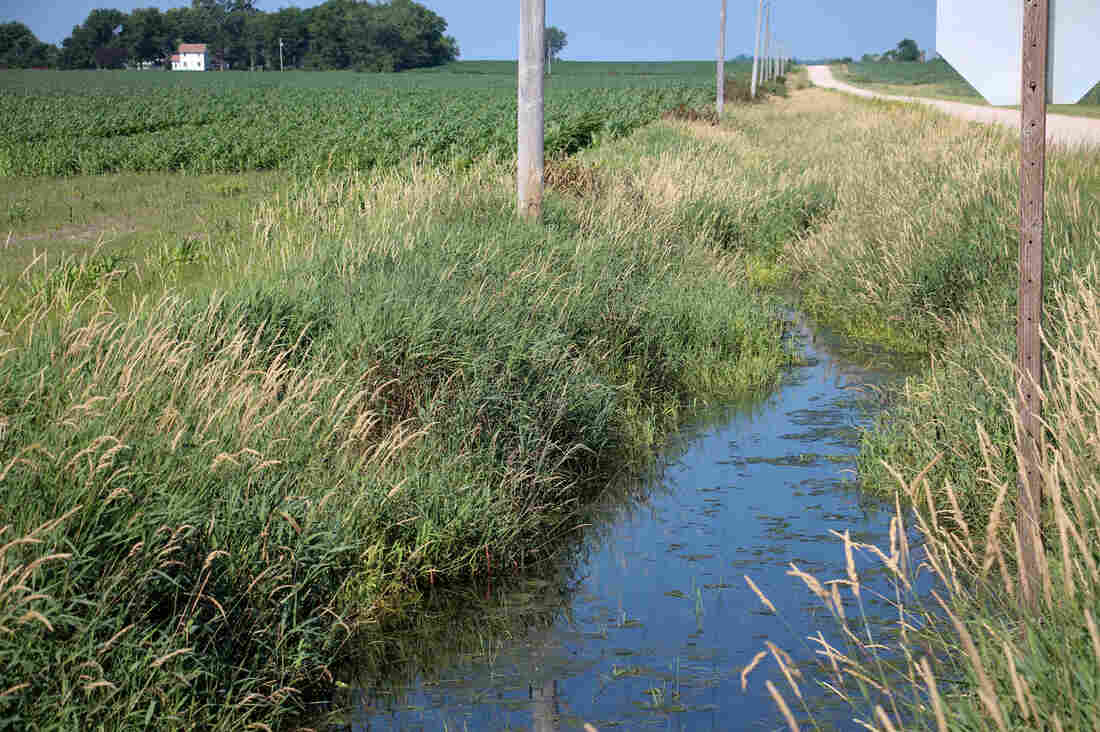 For a glimpse of what could happen to a trillion dollars worth of American farmland, meet Ray Williams.

He’s a lawyer-turned-farmer, growing organic grain and feeding young cows on 3000 acres in northeastern Oregon. Last year, he and his brother Tom decided that they were getting too old for the long hours and hard work.

“We told our clients, you don’t want to rely on senior citizens for your high quality organic products. Trust me on this!” says Williams, age 68.

Their farm sold for $23 million. The buyer was a company registered in Delaware, with a mailing address in Manhattan. The people behind that company wish to remain anonymous.

This left Williams with a pile of money to invest — and he parked almost $3 million of it in farmland halfway across the country. He bought 293 acres in Butler County, Iowa, from a farmer named Rich Showalter, and another 160 acres in O’Brien County from the estate of a woman who was born in Iowa, but died in Indiana at the age of 100.

The end result: Control over this land has passed to people with little personal connection to it, who live a thousand miles away. The new owners will decide what happens to that land, whether to plow or drain it, or even to stop farming it entirely. Their decisions will have profound effects on rural communities, wildlife, and even the global climate.

Similar deals are likely to happen on a massive scale in the coming years, according to Dave Muth, who helped Ray Williams sell and buy his farms. Muth is a partner with Alternative Equity Advisors, which is affiliated with Peoples Company, a Des Moines-based land broker. “Right now, over 80 percent of the farmland in the country is owned by somebody 55 or older, and roughly half of [them are] 75 or older,” Muth says. “We’re going to have an incredible shift in value over the next five to twenty years.”

Farmland has become steadily more expensive, and the pool of farmers and their heirs who can afford to buy it is shrinking. Yet there’s a growing appetite for it among investors, including pension funds and wealthy individuals like Williams. One large group of pension funds says that its members now own almost three times more farm properties than a decade ago. The market value of those holding has quintupled.

The day I met Steve Bruere, the president of Peoples Company, he had to step out of the room for a while to talk to someone on the East Coast who has $25 million available to spend on farmland. “Yeah, he wants to hop on a plane and come out and see us in two weeks,” Bruere said. “That’s how this stuff goes.” 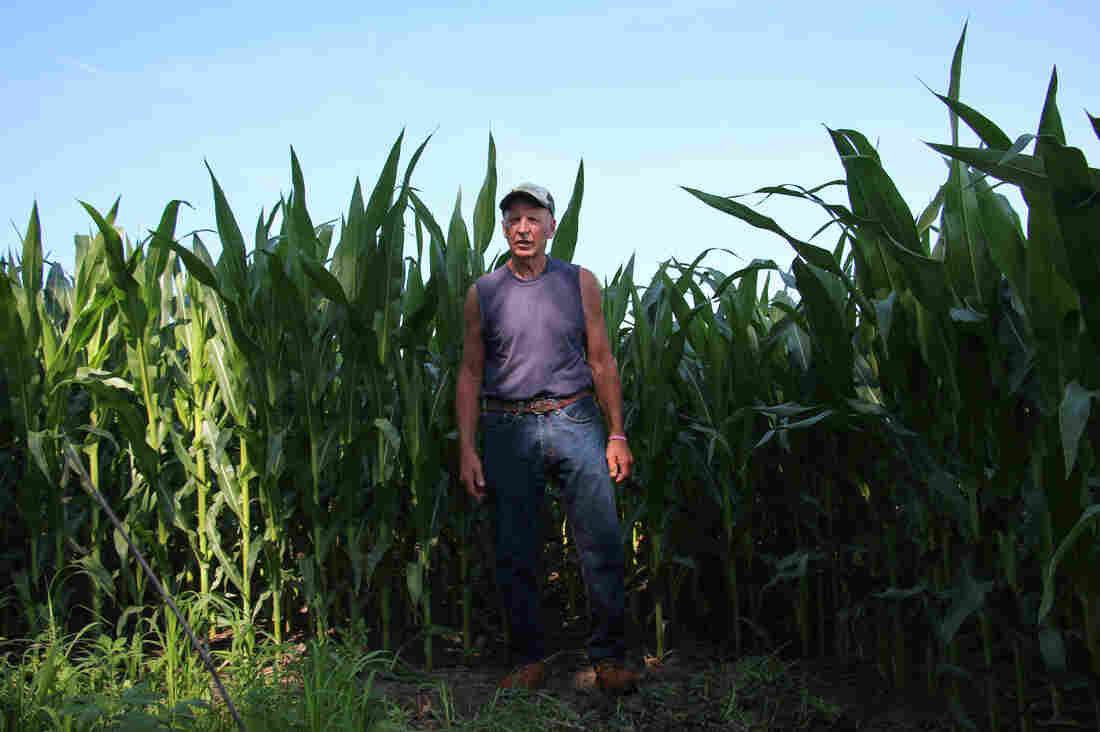 Rich Showalter bought this land in 1975. He sold it earlier this year to Ray Williams, who hasn’t yet had a chance to look at his new asset. Dan Charles/NPR hide caption 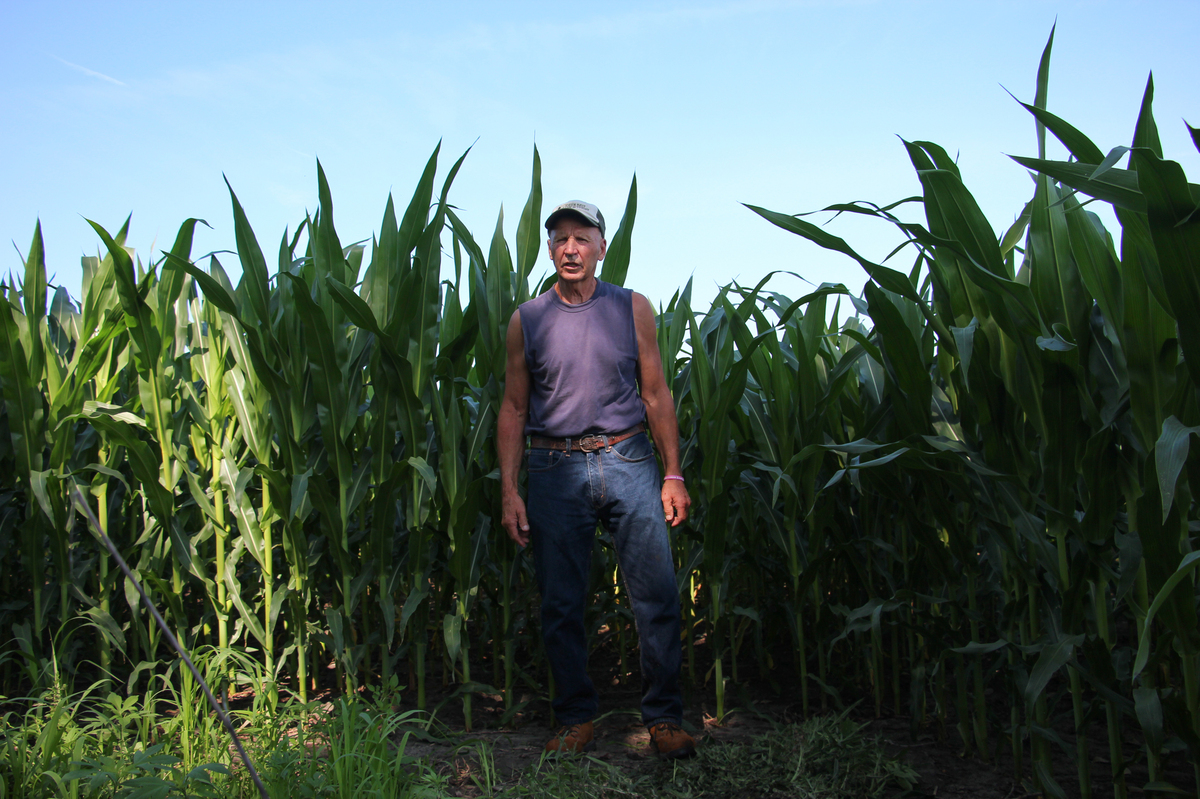 Rich Showalter bought this land in 1975. He sold it earlier this year to Ray Williams, who hasn’t yet had a chance to look at his new asset.

Absentee ownership itself has been common for many years. About half of Midwestern farmland already is owned by people who don’t actually farm it themselves. But it’s highly fragmented. Most landowners have relatively small parcels — perhaps 40 to 160 acres — that were passed down to them through family connections, often from relatives who once farmed it. Today’s farmers now compete for that land, often leasing parcels from many different owners.

Critics of large-scale, capital-intensive farming say that absentee ownership, even in its current form, has been destructive. They say that rented farmland often gets abused; that tenant farmers won’t spend money protecting soil and water because they can’t be sure that they’ll be around to see the benefits of that long-term investment. Many non-farming landowners won’t pay, either, simply because it cuts into their short-term rental income.

Sarah Carlson, from an environmentally-minded group called Practical Farmers of Iowa, points to the example of “cover crops,” which farmers plant in the off-season to protect the soil and reduce water pollution. She’s compared maps of Iowa that show rates of cover crop adoption and the prevalence of rented land. “It’s really dramatic, the two maps, placed next to each other,” she says. “Where the cover crops are, and where the cash-rent land is: they’re opposite.”

On the land that Ray Williams acquired from Rich Showalter, little seems to have changed, at least for now. It’s a big flat field of corn and soybeans just north of the small town of Dumont and the West Fork of the Cedar River. This was once wetland and prairie, the land of native people known as the Sauk and the Meskwaki. In the 1850s, the federal government sold it off to white settlers. Records at the Butler County recorder of deeds show that a dozen people have owned it since then. Rich and Sharon Showalter held it longer than any of the others.

Records at the Butler County Recorder’s office show who owned each parcel of land since the 1850s. Dan Charles/NPR hide caption

Records at the Butler County Recorder’s office show who owned each parcel of land since the 1850s.

This was the first land that Rich bought when he began farming, with his father’s help, in 1975. Today, at 74, he’s still farming with his three sons.

He’s attached to this land. “After 50 years, I know this farm pretty good,” he says. But his sons wanted to sell, because it’s inconveniently located twenty miles from his “home place” and the rest of his land. “They talked me into it, I guess,” he says.

Changes are about to arrive, and in this case, at least, they could be good news for Iowa’s water and wildlife. Peoples Company promotes itself as an environmentally conscious farm manager, and when it advised Ray Williams on his land purchases, it carried out a “profitability analysis” of the land, adding up the cost and the revenue from each acre. The company told Williams that it probably isn’t worth trying to grow crops on a low-lying part of the farm close to the river. The soil there is too often wet, despite underground drainage pipes.

Williams says he’s willing to stop farming that land. “Maybe you put pollinators [habitat] there,” he says. “I think we have an obligation to do what we can for the environment.”

The farm’s new managers, who work closely with Peoples Company, may also stop tilling these fields, planting crops instead by drilling seeds into undisturbed ground. Environmental advocates say both steps can protect water, soil, and capture carbon from the air.

Bruere argues that this is logical; that investors understand that it makes long-term financial sense to protect the environment. “I think the institutional capital – the ‘smart money,’ if you will – is ahead of a lot of people in agriculture in understanding that these farms need to be managed in a sustainable manner,” he says. “A well cared-for house is going to appreciate at a much higher rate than the house that wasn’t cared for. And farming’s the same way.” 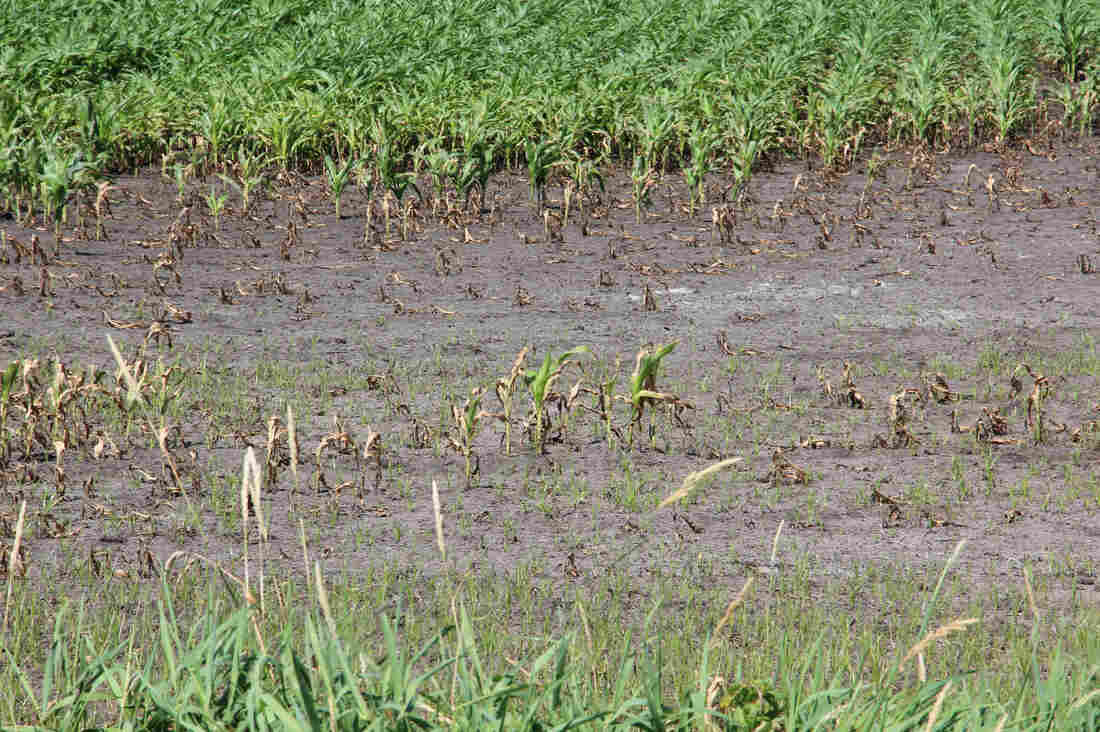 Crops often don’t grow well on part of the land that Williams bought. The ground stays too wet. Williams may convert it to wildlife habitat. Dan Charles/NPR hide caption 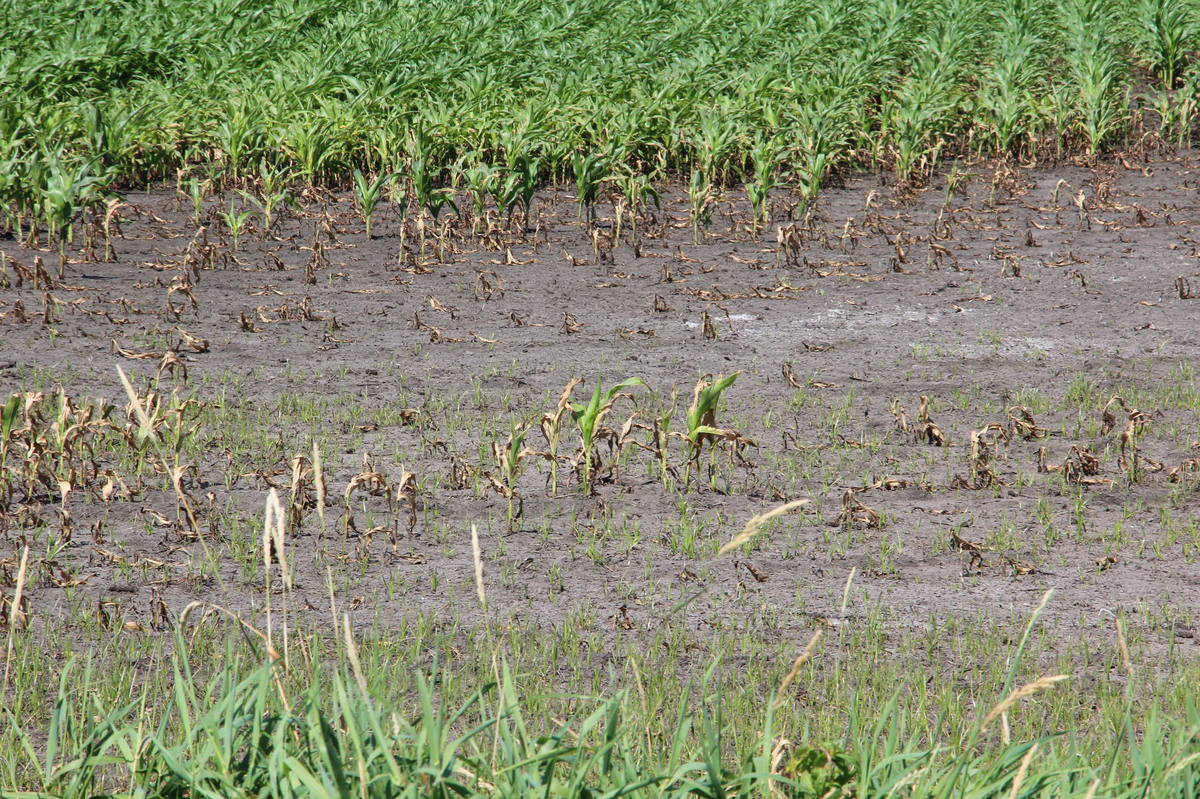 Crops often don’t grow well on part of the land that Williams bought. The ground stays too wet. Williams may convert it to wildlife habitat.

The more obvious change, though, is the soaring ambition that big-time investors sometimes bring. Among the most dramatic recent examples is a 25,000-acre farm — if one can call it that — in the southwest corner of Arkansas, near the Texas border. Goldcrest Farm Trust, a real estate investment fund, acquired the land in 2018. Edward Hargroves, co-founder of Goldcrest, says that “we’ve been cleaning ditches, leveling land, ripping out weeds and trees and putting in massive pumping stations on the river so that we can re-irrigate it, putting in 70 miles of pipeline across the property.”

Hargroves says that the scale of this property opens up possibilities that are beyond the reach of any ordinary farm. “You can start to talk to food companies, multinationals, sovereign [governments] and say, ‘In one area, you can grow millions of bushels of corn or soy or rice or cotton or wheat.'”

Dave Muth, from Alternative Equity Advisors, says that farming “almost has to” move in a more high-tech, large-scale direction. But this is not a popular view in rural communities, where many mourn the loss of local control.

Even people who’ve profited from this trend have regrets. “I would rather sell it to fellow farmers, neighbors,” says Rich Showalter. But none of his immediate neighbors were ready to take on the whole property. “It’s just a lot of money, you know?”