Clemson football coach Dabo Swinney on Monday defended and addressed recent incidents involving the program this past week that painted it in a negative light.

He released a nearly 14-minute video on the team’s website in an effort to discuss those criticisms ranging from him appearing to wear controversial shirt amid nationwide protests and an assistant coach directing a racial slur toward a player three years ago.

Swinney addressed a picture that surfaced on social media which appeared to show him wearing a “Football Matters” shirt amid protests across the U.S. against racial injustice and police brutality. He said it was given to all coaches a couple of years ago by the National Football Federation and “that’s been their promotional thing [since 2014].”

“Any insinuation that I was trying to mock the Black Lives Matter movement is just an attack on my character,” he said. “And really sad. I wholeheartedly support Black Lives Matter. In fact, I don’t quite think that’s adequate enough.”

Tigers quarterback Trevor Lawrence was among those who defended Swinney over the weekend.

“Coach Swinney’s shirt, in any way, is not mocking the Black Lives Matter movement,” Lawrence wrote on Twitter Sunday. “He has been wearing the shirt for months in meetings.”

He tweeted a heart emoji following his coach’s comments on Monday.

Swinney also addressed and defended comments made by Clemson assistant coach Danny Pearman during a practice in 2017. Pearman had apologized nearly a week ago, calling it “a grave mistake” for using a racial slur during an incident involving former player D.J. Greenlee.

Swinney said the incident “did not happen,” adding he “would fire a coach immediately if he called a player the n-word. No questions asked.” 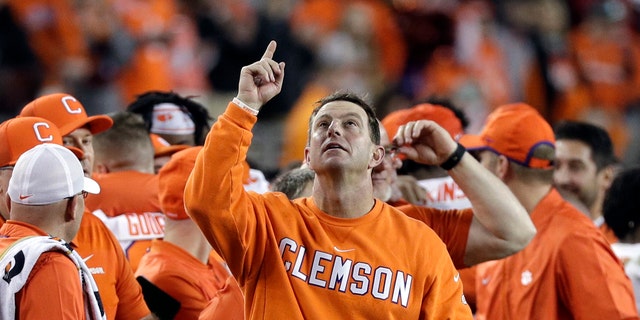 CLEMSON ASSISTANT COACH APOLOGIZES FOR 2017 USE OF RACIAL SLUR

“Absolutely did not happen. It has not happened. Coach Pearman was correcting D.J., and another player was talking to D.J., or D.J. was yelling at the player, and D.J. said something he probably shouldn’t have said,” he said.

Clemson receiver Kanyon Tuttle posted about the incident on social media because he was upset Swinney never addressed it with the team.

“There wasn’t anything swept under the rug,” Swinney responded. “There wasn’t some dirty secret. We handled it head-on.”

Tuttle also wrote on Twitter Jun. 2 that Swinney had suggested players not participate in a 2016 sit-in on campus, which the coach denied.

“We had players participate in the Sikes Sit-In. I would never tell someone they could not participate in something they believe in or exercise their basic right. But as a coach, our job is to teach, educate, protect, to inform,” Swinney said on Monday. “I stood in front of the team, and the only thing I said was if you’re going to participate, make sure you know what you’re signing up for.”

He added it was hurtful seeing his program attacked while adding that “we will do our part to create positive change against racism of any kind, social injustice, and police brutality.”

“We will continue to communicate and continue to get better. We have much more work to do, but we have taken a lot of action over the past decade to help create change for our players and our community, and we will continue to do that,” the coach said.