“I think that’s you,” said a squinting Sen. Marco Rubio, staring across a cavernous hearing room from a near-empty dais. “People watching on television can’t see that far away.”

Rubio, R-Fla., clearly was trying to focus. He wanted to make sure he was, in fact, addressing Rep. John Ratcliffe, R-Texas, President Trump’s nominee to serve as his director of national intelligence.

When Senate Intelligence Committee Chairman Richard Burr, R-N.C., dropped the gavel around 9:30 a.m. Tuesday for Ratcliffe’s confirmation hearing, it marked the first such session in the Senate in nearly two months.

“This hearing will be a little bit different,” Burr said at the outset of the latest foray.

Senators usually would squeeze onto the dais for a hearing, practically glowering over witnesses at a table just a few feet in front of them, but no more. This time, senators were spread out on two sets of daises. The North Carolina Republican, now sporting a beard in honor of his friend, the late Sen. Tom Coburn, R-Okla., announced that senators would rotate into the room in blocks.

“We have asked members to watch as much of the hearings as they can from their offices and only to come to the hearing room to ask questions,” Burr said.

Ratcliffe fidgeted in his chair. To his left stood a plastic bottle of water – arranged next to a dispenser of hand sanitizer and a circular canister of disinfecting wipes.

Such is the new normal on Capitol Hill.

The Senate Banking Committee conducted a confirmation hearing of its own a few hours later, with Brian Miller up to serve as Treasury Department inspector general for the recovery of the coronavirus pandemic, and Dana Wade nominated to serve as assistant Housing and Urban Development secretary. Both wore masks during their testimony, seated yards away from senators who also swapped turns in the room. A black, velvet cloth lined a series of tables to form a massive, closed loop. It resembled something like a giant playpen enclosure for toddlers at the mall. Two news photographers patrolled the zone in the middle.

Multiple Democrats didn’t even show up in person, but latched in via teleconference: Sen. Sherrod Brown of Ohio who serves as the top Democrat on the panel, along with Sens. Jon Tester of Montana, Chris Van Hollen of Maryland, Elizabeth Warren of Massachusetts, Mark Warner of Virginia, Catherine Cortez Masto of Nevada, Doug Jones of Alabama and Tina Smith of Minnesota. 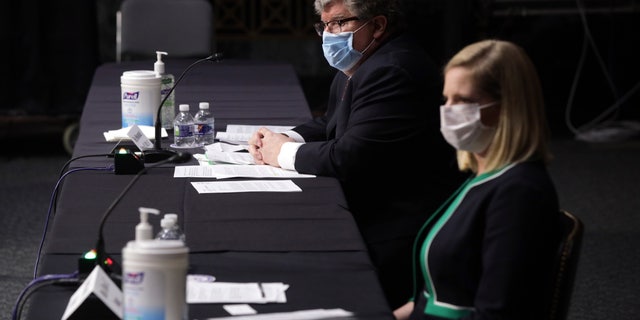 Brian Miller and Dana Wade at the hearing of the Senate Banking, Housing, and Urban Affairs Committee Tuesday on Capitol Hill. (Alex Wong/Pool via AP)

“I’m worried about all of the Capitol staff and putting their health and lives at risk. A lot of them are my constituents,” Van Hollen said. “The last thing we want is for the United States Senate to become part of the coronavirus vector that undermines the efforts of this region.”

When arriving for Ratcliffe’s confirmation hearing, news pool producer Haley Talbot asked Sen. Jim Risch, R-Idaho, if it was safe for senators to be at the Capitol. 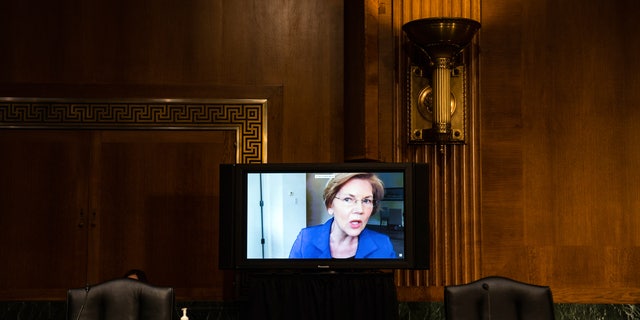 And, what did the Senate do once McConnell reconvened the body on Monday night?

Senators confirmed Robert Feitel to serve as inspector general for the Nuclear Regulatory Commission, 87-0. It was the first vote on the Senate floor since senators approved the coronavirus “phase three” bill 96-0 on March 25.

The Senate scheduled no votes for Tuesday. As a result, Senate Minority Leader Chuck Schumer, D-N.Y., used his floor time to blast McConnell for not working on the next piece of coronavirus legislation.

During his floor speech, McConnell infused presidential politics into the coronavirus debate.

“The last thing we’ll need is for the political left to view this national crisis as an exploitable opportunity to achieve other goals they’ve wanted for a long time,” McConnell said. “That is how, for example, former Vice President Biden has repeatedly described the pandemic: ‘An incredible opportunity – to fundamentally transform the country.’”

CORONAVIRUS: WHAT YOU NEED TO KNOW

But, the two Senate hearings shed light on what life on Capitol Hill likely will be like for months – if not much longer.

When the House met briefly Tuesday morning to swear-in Rep. Kweisi Mfume, D-Md., a handful of members stood at a distance. House Reading Clerk Susan Cole and House Chaplain Rev. Patrick Conroy spoke not from the dais, but from a lectern far away in the House chamber.

Most congressional staffers have been banished, toiling from basements and apartments – sometimes just blocks from the Capitol. That’s because congressional offices are notoriously tiny – especially on the House side. Often, 10 or more aides were squeezed into condensed quarters. 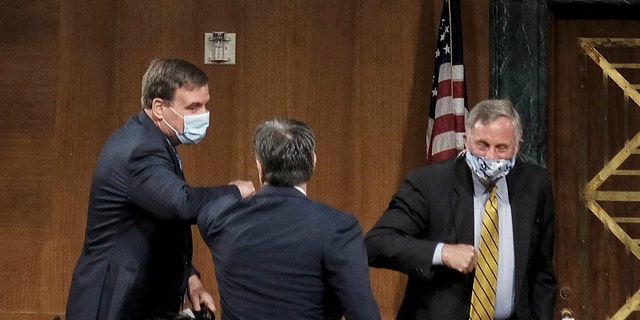 In lieu of in-person meetings with constituents or lobbyists, staff and members have been communicating over Skype. And, when some members of the public do return to the halls of Congress, they may soon find transparent barriers separating them and House staff assistants greeting visitors at the front desk. Capitol Attending Physician Dr. Brian Monahan advised offices about installing such barriers in guidance to congressional offices last week.

The Capitol has pulsed whenever Congress was in session. There’d be a clamor in the halls. Bells and buzzers would sound, signaling votes on the floor. Elevators rattled. A din filtered out into the hallways of the Longworth House Office Building as lobbyists and tourists co-mingled, waiting in line for coffee. Long lines snaked around corridors in the Hart Senate Office Building for major hearings.

But, not now. Congress won’t have any of that anytime soon, and it’s unclear when it can.

Fox News is told that Monahan told House Democrats it may take “years” for Congress to return to normal.

What would that mean? Lots of social distancing is likely, with stretched-out roll call votes and aides writing news releases and legislation from balcony apartments near Nats Park.

There’s a big dispute now as to whether Congress and its workers should have access to accelerated testing. McConnell and House Speaker Nancy Pelosi, D-Calif., rejected such an opportunity in a rare joint statement over the weekend. There have been concerns about the optics of Congress getting the tests before the general public. House Minority Leader Kevin McCarthy, R-Calif., saw it differently. McCarthy argued that Congress should have the tests so it could conduct the nation’s business safely.

Senate Health Committee Chairman Lamar Alexander, R-Tenn., pulled no punches in a statement Tuesday afternoon when it came to testing.

“This is not mostly about protecting members of Congress. It is about protecting the people members might infect,” Alexander said. “Bringing 100 or 535 members from across the country to Washington, D.C., a coronavirus hotspot, and then sending them home each weekend, creates a highly efficient virus spreading machine.”

If Alexander is right, the new normal on Capitol Hill could still be deadly, despite precautions. And, the old way of doing things in Congress – be it hearings, votes, news conferences or just chatting with constituents – could be in the rearview mirror for a long time.