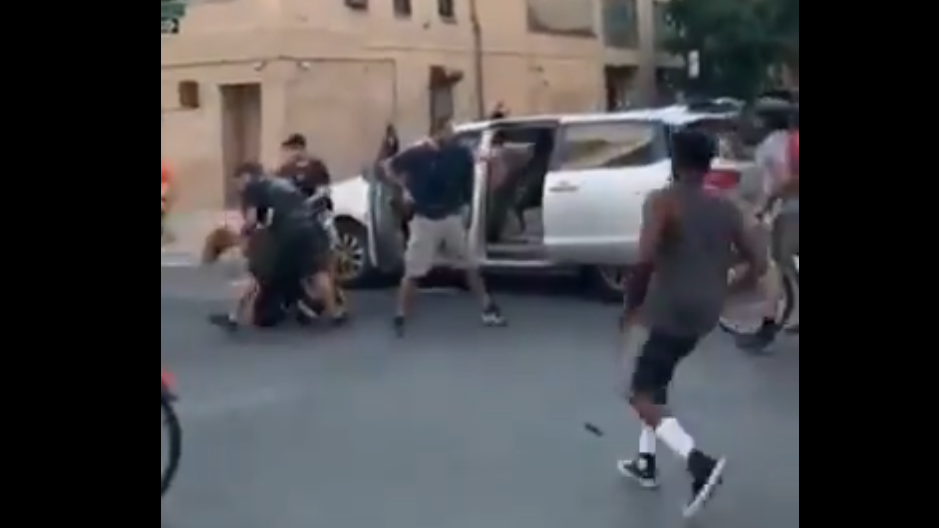 The New York City Police Department has come under rising criticism after plainclothes officers aggressively detained a woman at a protest and hauled her away in an unmarked vehicle.

Video posted to social media shows men forcefully grabbing Nikki Stone, 18, off the street Tuesday during a demonstration against police brutality and shoving her into an unmarked police van. Uniformed bicycle officers then appear and form a perimeter around the vehicle as bystanders shout in protest.

NYC is taking after Portland – a trans femme protestor was pulled into an unmarked van at the Abolition Park protest – this was at 2nd Ave and 25th Street pic.twitter.com/1PDhSYuK9h

People sharing the video online compared the incident to the controversial tactics deployed by federal agents in Portland, Ore., who have in recent weeks used unmarked vans to snatch protesters quickly and covertly off the streets.

New York Mayor Bill de Blasio criticized the style of detainment, though not the arrest, suggesting the officers should have chosen a less high-octane moment to detain the woman.

“A lot of us have watched in pain what’s been going on in Portland, Ore. So anything that even slightly suggests that is, to me, troubling, and it’s the kind of thing we don’t want to see in this city,” de Blasio said.

“That was not the time and place to effectuate that arrest. It made sense to do it in a situation that was clearly not in the middle of an ongoing protest.”

New York police said in a statement late Tuesday that a warrant squad took Stone into custody on suspicion of damaging police cameras in five incidents. Surveillance video posted to Twitter by Chief of Detectives Rodney Harrison appeared to show Stone using paint to obscure two different cameras and using a broom in an attempt to tear down a third.

However, damage to NYPD technology that helps keep this city safe will never be tolerated. These cameras are vital resources which help prevent and solve crimes throughout the city. pic.twitter.com/dwv5vkhQiP

That evening, the hashtags #WheresNikki and #WhereIsNikki trended online as activists demanded to know why and where Stone had been taken.

Police said Stone had been charged with criminal mischief and making graffiti over five such suspected incidents over two months.

Critics on Wednesday decried the manner in which police apprehended and detained Stone.

“I don’t know that this was really the most professional police conduct. I see an officer at one point with his hand on his gun. I think that’s in and of itself inappropriate,” said Frank Straub, a former police chief in Spokane, Wash., who now works for the National Police Foundation.

“You see an unmarked van pull up, you see people that are not identified as police officers grab someone and throw them in a van … when we know that is a point of challenge across the country,” Straub said, describing the “troubling optics” of the situation.