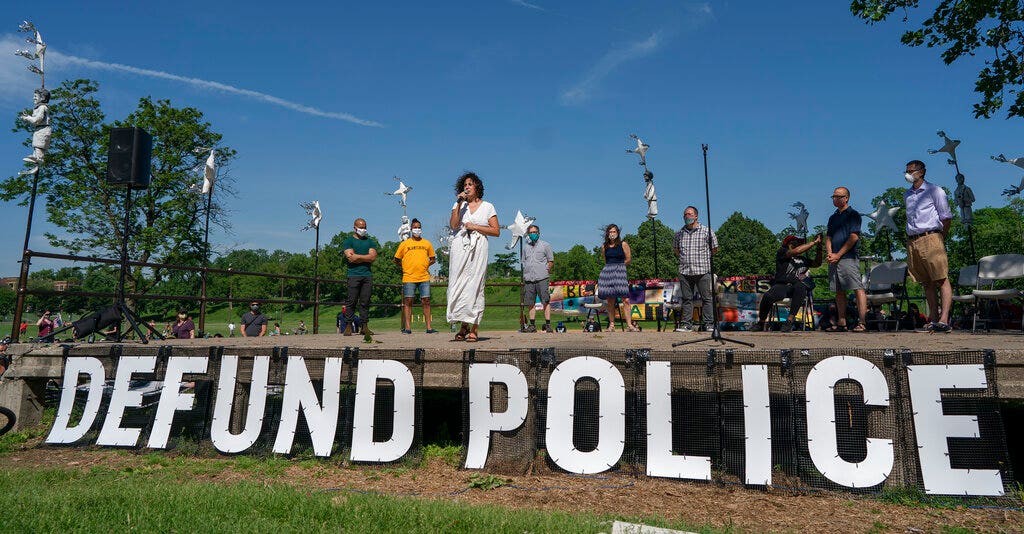 Since the May 25 death of George Floyd, police reform has been debated by lawmakers and elected officials across the country. Some of the most vocal protests have been pushing a “Defund the police” movement, a mantra that was notably painted on a street just steps from the White House.

However, that has sparked a debate within itself as to whether that slogan is a broad description of police reform or if it truly means the end of police in America.

BILL MAHER BLASTS ‘DEFUND THE POLICE’ BRANDING: HOW ARE DEMS ‘THIS F—ING STUPID?’

Anti-criminalization activist Mariame Kaba attempted to settle the debate with the op-ed, “Yes, we mean literally abolish the police.”

“Congressional Democrats want to make it easier to identify and prosecute police misconduct; Joe Biden wants to give police departments $300 million. But efforts to solve police violence through liberal reforms like these have failed for nearly a century,” Kaba began. “Enough. We can’t reform the police. The only way to diminish police violence is to reduce contact between the public and the police.”

Kaba claimed there was “not a single era” in American history when the police was not a “force of violence against black people” dating back to slavery.

“When you see a police officer pressing his knee into a black man’s neck until he dies, that’s the logical result of policing in America” from officers who believe it’s “his job,” Kaba wrote.

She then attempted to dispel the notion that police are meant to “catch the bad guys,” something she suggests is a “myth” since most arrests they make aren’t felonies.

“The first thing to point out is that police officers don’t do what you think they do. They spend most of their time responding to noise complaints, issuing parking and traffic citations, and dealing with other noncriminal issues,” Kaba explained. “We can’t simply change their job descriptions to focus on the worst of the worst criminals. That’s not what they are set up to do.”

“Police officers don’t do what you think they do. They spend most of their time responding to noise complaints, issuing parking and traffic citations, and dealing with other noncriminal issues.”

Kaba called for cutting both police staffing and budgets “in half,” insisting “fewer police officers equals fewer opportunities for them to brutalize and kill people.”

She argued that police “break rules all the time,” pointing to how Derek Chauvin, the former Minneapolis officer whose knee was on Floyd’s neck until he died, had 17 prior complaints.

“Why on earth would we think the same reforms would work now? We need to change our demands. The surest way of reducing police violence is to reduce the power of the police, by cutting budgets and the number of officers,” Kaba elaborated. “But don’t get me wrong. We are not abandoning our communities to violence. We don’t want to just close police departments. We want to make them obsolete.”

She suggested directing funds to “health care, housing, education and good jobs,” insisting that would lead to a lesser “need for the police in the first place” and that “community care workers” can “do mental-health checks” for people who need help.

“When people, especially white people, consider a world without the police, they envision a society as violent as our current one, merely without law enforcement — and they shudder,” Kaba wrote.

“When people, especially white people, consider a world without the police, they envision a society as violent as our current one, merely without law enforcement — and they shudder.”

As a society, we have been so indoctrinated with the idea that we solve problems by policing and caging people that many cannot imagine anything other than prisons and the police as solutions to violence and harm.”

She continued, “People like me who want to abolish prisons and police, however, have a vision of a different society, built on cooperation instead of individualism, on mutual aid instead of self-preservation… When the streets calm and people suggest once again that we hire more black police officers or create more civilian review boards, I hope that we remember all the times those efforts have failed.”

The op-ed’s bold “Defund the police” declaration sparked some reactions on social media.

“The @NYTimes just told us the truth and that ABC, CBS, CNN, MSNBC, and droves of other liberal media outlets were lying when they said not to think that they’re saying all police need to go,” NewsBusters managing editor Curtis Houck reacted.

New York Magazine columnist Josh Barro pointed out, “This op-ed does not address how serious crime *would* be addressed under police abolition, except to say more social services would reduce crime and that towns could have restorative-justice models. I don’t get people acting like this is a side question.”