The bad news is that Congress didn’t manage to fix these problems last week when it passed the next funding round of $310 billion. Without some important changes, many genuine small businesses will continue to fall through the cracks.

The good news, however, is that it’s not too late to fix the program. The Treasury Department has the ability to correct many of these problems through changing how it administers the program. Here are several ways to that end.

Cap the Loans at $1 Million

First, assistance under the program should be capped at $1 million per loan. Only 4 percent of the loans made in the first batch were for more than $1 million, but they ate up 44.5 percent of the initial $349 billion Congress put into the program. As the chart below shows, the loans that made it to what most consider small businesses accounted for only about a third of the actual money. Had Congress set a maximum limit of $1 million it would have freed up over $150 billion — enough money to more than double the number of truly small businesses that received aid.

Treasury can effectively do this through regulation by prioritizing small loan requests. Given the overwhelming demand for these funds, Treasury could easily spend all of the new money just on these really small businesses. 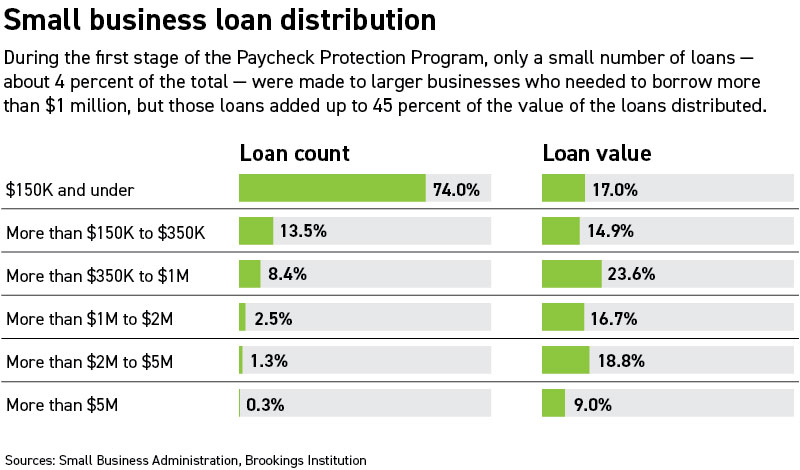 Change How Lenders Are Paid

Second, the Treasury Department needs to change how it compensates lenders for making these loans. Currently, Treasury and SBA pay lenders as a percentage of each loan, which means a lender gets five times as much money to generate a $5 million loan as for a $200,000 loan. This helps explain why so many larger companies received loans while so many small ones were told they were too late.

Instead, going forward, Treasury should pay lenders a flat fee for each PPP loan they originate. This would align the compensation with the goals of the program: the more small loans a lender makes, the more money it will earn.

Third, the Treasury should streamline existing anti-money laundering regulations on these loans. These regulations incentivize banks to take only existing customers, particularly those to whom the bank had already lent money. This is particularly harmful to smaller and minority-owned businesses that are less likely to have existing loans from banks. This should be an easy lift for an administration focused on removing regulatory roadblocks to recovery.

The biggest change Congress made to PPP last week was setting aside $60 billion of the new money to be disbursed by smaller banks, arguing they’d have more truly small-business customers.

However, like the term “small business,” the term “small bank” can be misleading. One of these smaller banks is TCF Bank, which paid $35 million for the naming rights to the University of Minnesota’s football stadium, and whose CEO owned a yacht named Overdraft (a high fee product that generates major profits for the bank). Banks that buy naming rights for Big 10 stadiums probably have pretty big clients, too. What’s more, many small businesses use large banks, and those small businesses are now less likely to qualify. However, by prioritizing smaller loans, Treasury can make sure that smaller banks focus their lending on smaller businesses.

Remember, calling these loans is a misnomer. These are really grants. Economically, there is no distinction between a loan that will be forgiven if conditions are met and a grant that must be returned if conditions are violated. The interest rate on such a loan — 1 percent in this case — is basically a penalty fee for violating the terms of a grant. The PPP is designed as a loan primarily for distribution purposes; the federal government has no mechanism to distribute grants across businesses, while banks do.

But pouring more money into this program, without tightening the eligibility criteria and changing incentives for lenders will likely mean that Main Street small businesses will continue to fall through the cracks. That is an outcome neither party wants. Fixing it through smart implementation and regulation ought to be a win for both sides.