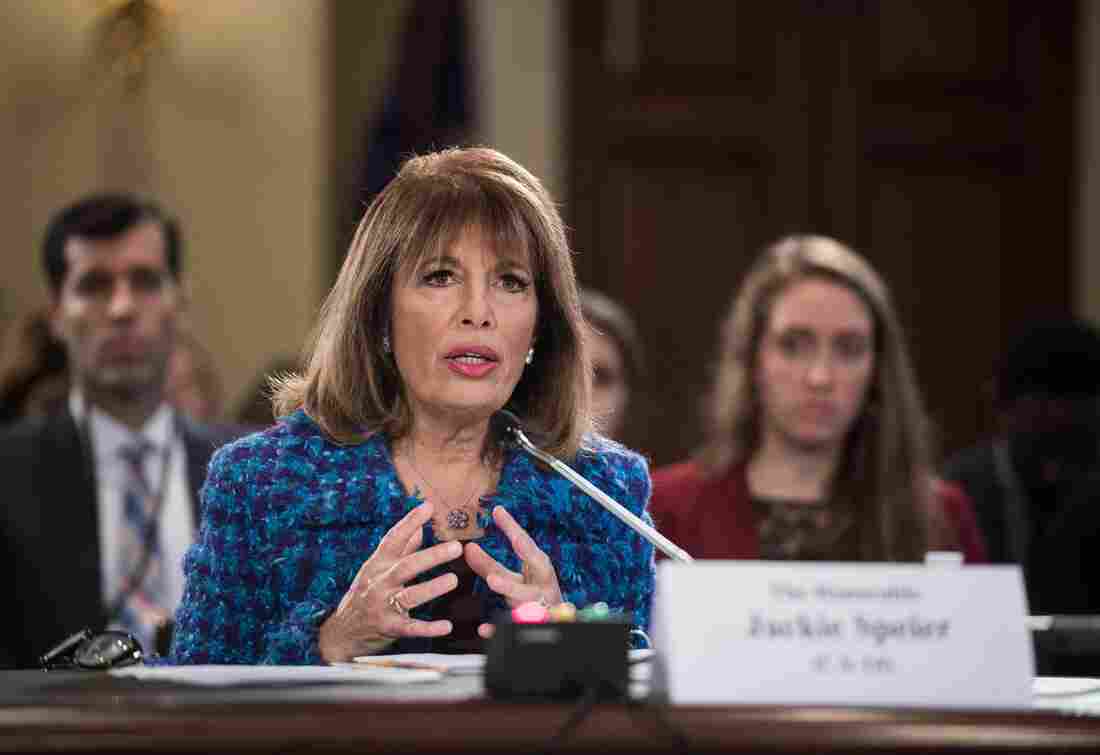 Rep. Jackie Speier, D-Calif., shown here on Capitol Hill in 2017, has called for the practice of members sleeping in their offices to end for good. Nicholas Kamm/AFP via Getty Images hide caption 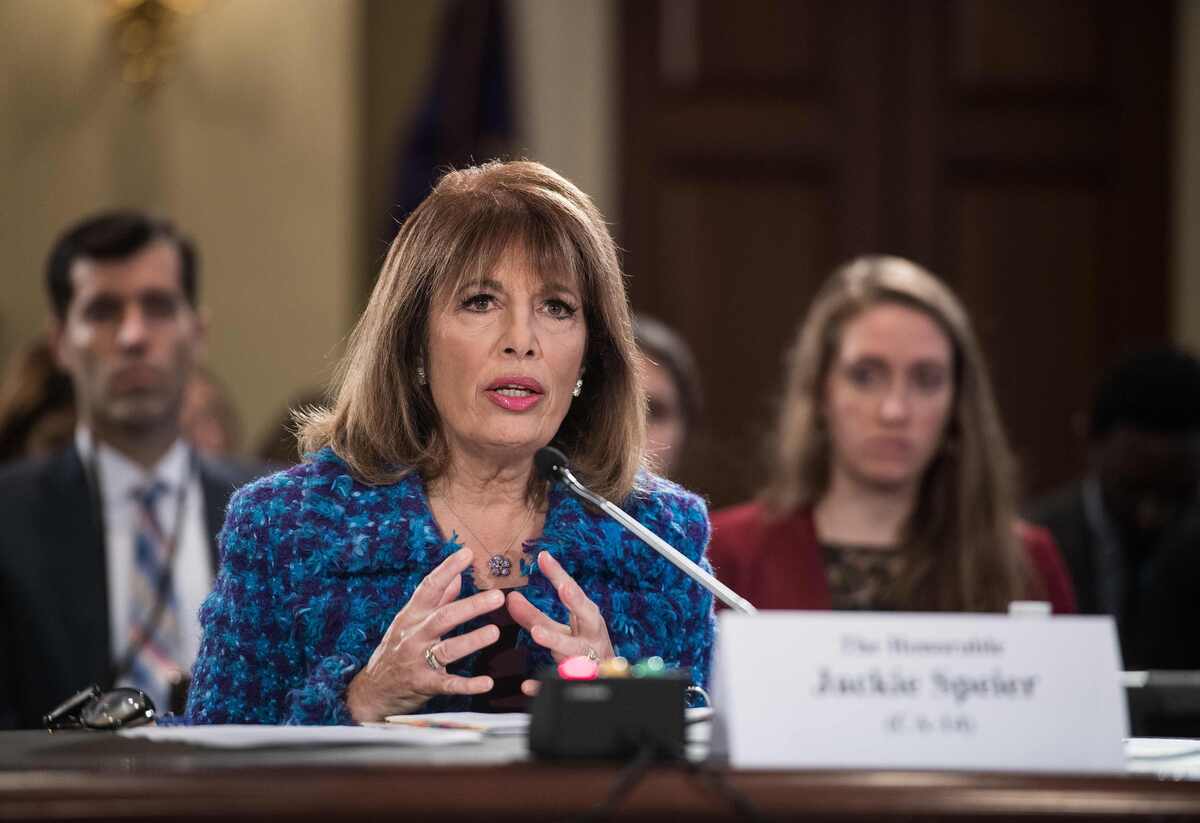 Rep. Jackie Speier, D-Calif., shown here on Capitol Hill in 2017, has called for the practice of members sleeping in their offices to end for good.

For some members of Congress, an office on Capitol Hill is just, well, an office. But for others, it doubles as their apartment while they live and work in Washington, D.C.

It’s a practice Rep. Jackie Speier, D-Calif., would like to see permanently banned.

“You know, they sleep on their couches, they then get up in the morning, sneak downstairs [to] the members’ gym, shower, change their clothes, and come back up for work,” she describes.

“Imagine if you said to a constituent coming into your office, ‘Welcome, come into my bedroom.’ Because for all intents and purposes, that’s what, I mean, I don’t know if I’d want to sit on anyone’s couch,” Speier chuckles.

She says members making their office a home away from home is troubling on several fronts, calling the practice an inappropriate use of taxpayer funds and something that can make staffers feel uncomfortable.

“During the height of the ‘Me Too’ movement in the House, there were stories about members in their pajamas talking to staff,” Speier says. “It’s abnormal to do that.”

Speier argues it’s particularly important to end the practice now out of a need for increased health and safety vigilance because of the coronavirus pandemic.

In a May 1 letter to the architect and attending physician of the Capitol, Speier noted that about 30 construction workers and police officers at the Capitol had tested positive for the virus. Additional Hill staff have also tested positive.

She posited if members sleep in their offices, there could be a greater chance of exacerbating the public health risk among members, aides and janitorial staff.

The House is slated to return this week to consider another coronavirus relief package.

Previous reports have estimated that up to 100 members of Congress — mostly Republicans — live in their offices while in D.C. The last House speaker, Paul Ryan, was one of them. North Carolina Republican Rep. Ted Budd does it now.

Elected in 2016, Budd says he invested right away in a Murphy bed, otherwise known as a wall bed or pulldown bed.

“It has a Tempur-Pedic mattress and [is] very comfortable, but it’s completely invisible during the day and just sleeps like normal,” he describes.

Budd says his main motivation behind the decision was to keep life simple.

“When I came in as a freshman and people were trying to figure out places to live … I was off to the races and working on great committee work right out of the gate,” he says. “And so I skipped all of the normal ramp-up time of starting up a new place to live and just went right to work.”

Budd says he’s not surprised by Speier’s calls to curb this practice.

“Every two years at the beginning of a new Congress, there’s a concerted effort by the left … to try to kick us out of our offices,” Budd says.

He thinks concerns that members living in their offices could magnify public health risks are unfounded.

“We’re all adults here. We know how to wash our hands. We know how to have social distancing. We know how to be sanitary. And we all do that,” he says. “And I just think this has nothing to do with COVID-19, but [Democrats are] certainly not going to let an opportunity like this or a crisis go to waste.” 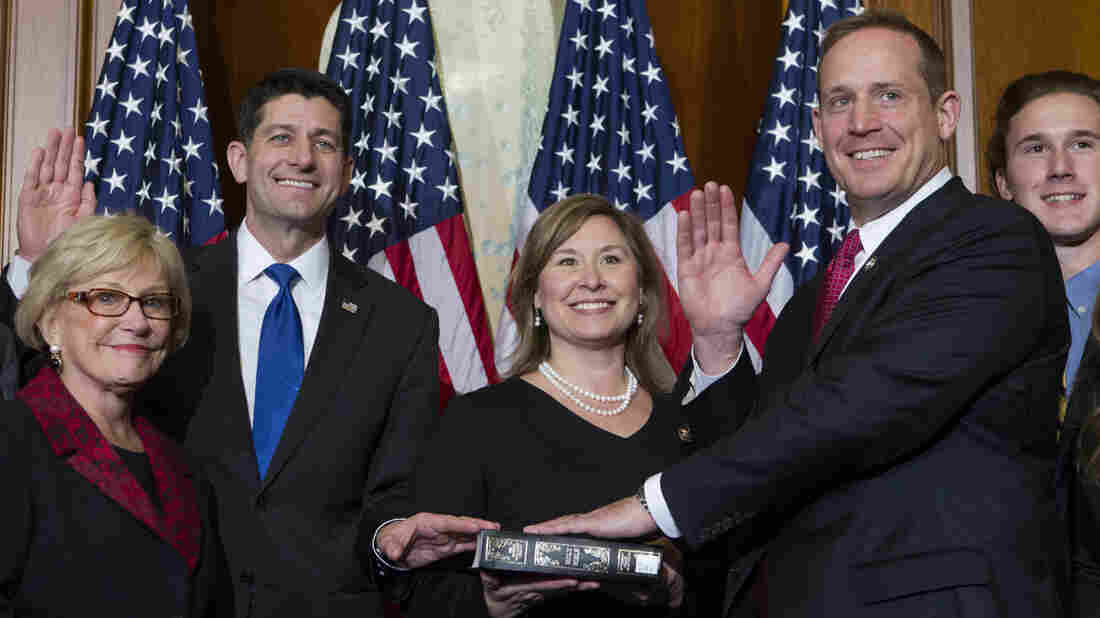 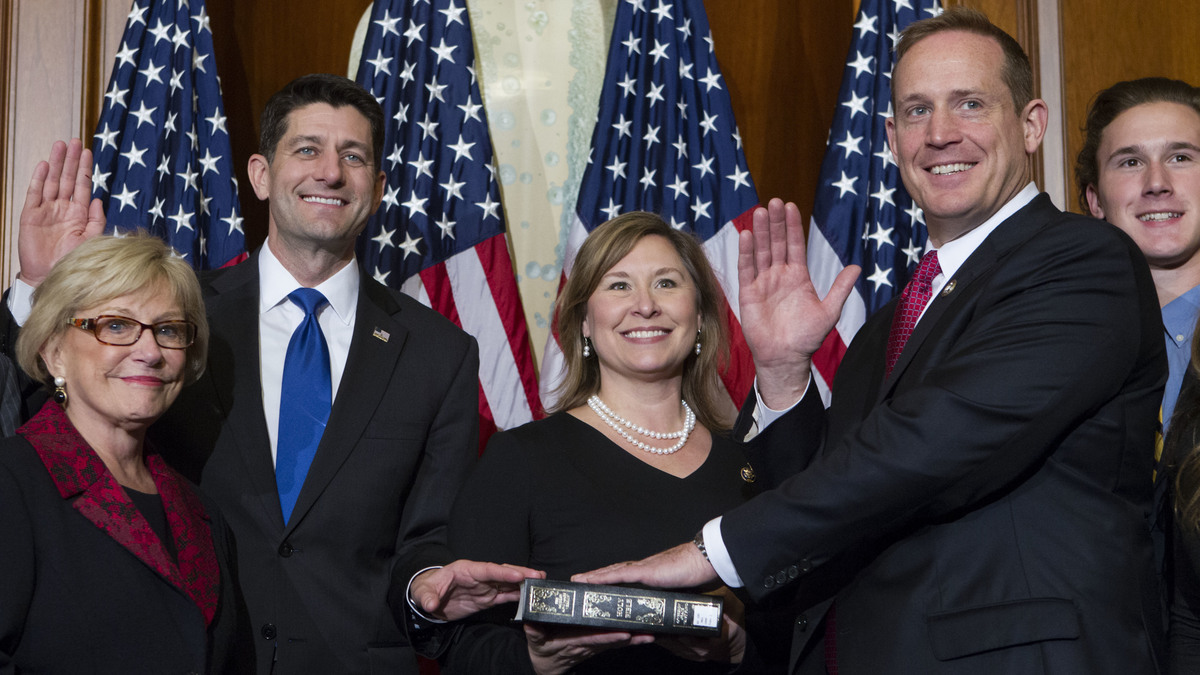 Rep. Ted Budd, R-N.C., right, seen here at his mock swearing-in with family in 2017, defends his sleeping in his office. It’s something former House Speaker Paul Ryan did as well.

Budd thinks there’s an underlying agenda among Democrats to get a housing allowance in place for members.

Rank and file members of Congress make around $174,000 a year. One-bedroom apartments in D.C., which would likely serve as a secondary place of residence for members, can cost more than $2,000 a month.

“When people say, ‘Well, it’s very, very expensive to live in Washington,’ that’s true,” Speier says. “But you ran for this office knowing what the salary was and what the expectation was. So to then decide that you’re going to turn your office into a bedroom is not appropriate.”

And while Speier suggests looking into giving a per diem or a stipend to members to mitigate the cost of D.C. living, Rep. Bennie Thompson, D-Miss., says that’s not Democrats’ main goal.

“I’ve been a member for 27 years and I have paid rent every day that I have been there,” he says. “So why would I push a housing allowance when I’m already paying?”

Thompson has filed complaints with the House Committee on Ethics over the practice and introduced a bill in 2018 to prohibit members from sleeping in their offices, as a way to save money.

“I think the attending physician will have to make some serious health and medical decisions around whether it’s in the best interests for those members to be allowed to sleep in our offices, given what we know of the volatility of this pandemic and the fact that Washington, D.C., in itself is considered a hotspot,” he explains. “I would hope that Congress takes a harder look at it and says, you know, it’s one thing skirting the ethics rules, but it’s really something else when you put lives at risk.”

Thompson says it’s time to have a “frank” discussion in Congress about this practice, because there’s also a financial aspect to it.

“If I receive free rent, free utilities, free cable, free janitorial services, free gym services, then that’s a value that I can’t receive from anywhere else,” he says. “I am, by virtue of staying in my office, receiving something that’s probably worth $25,000 to $30,000 per year, if I had to monetize it.”

The attending physician didn’t include anything on this issue in its guidelines to members on returning to the Capitol, and declined NPR’s request for an interview.

Speier asked for a response from the architect of the Capitol and Office of the Attending Physician by May 14.