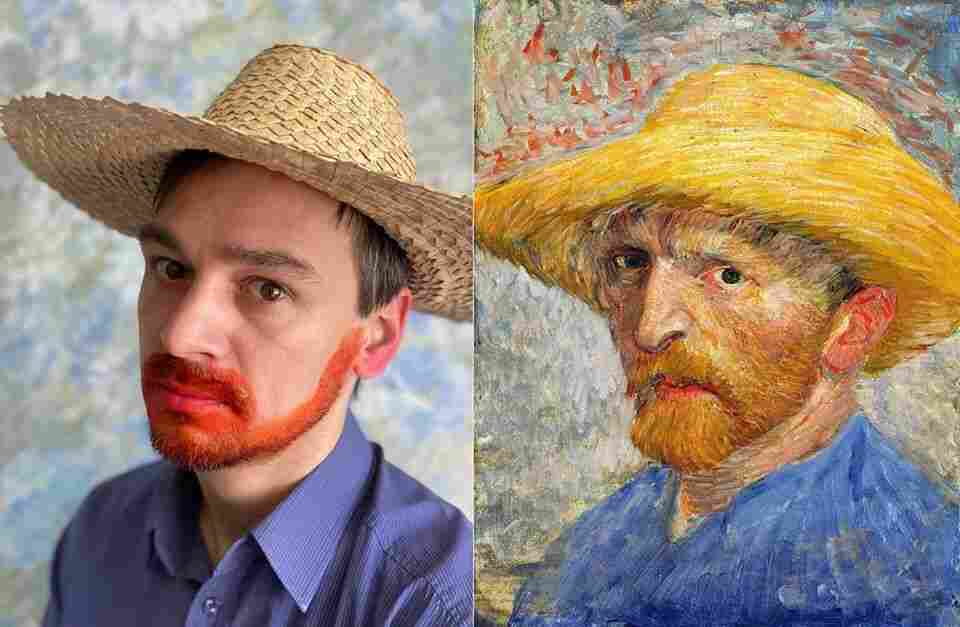 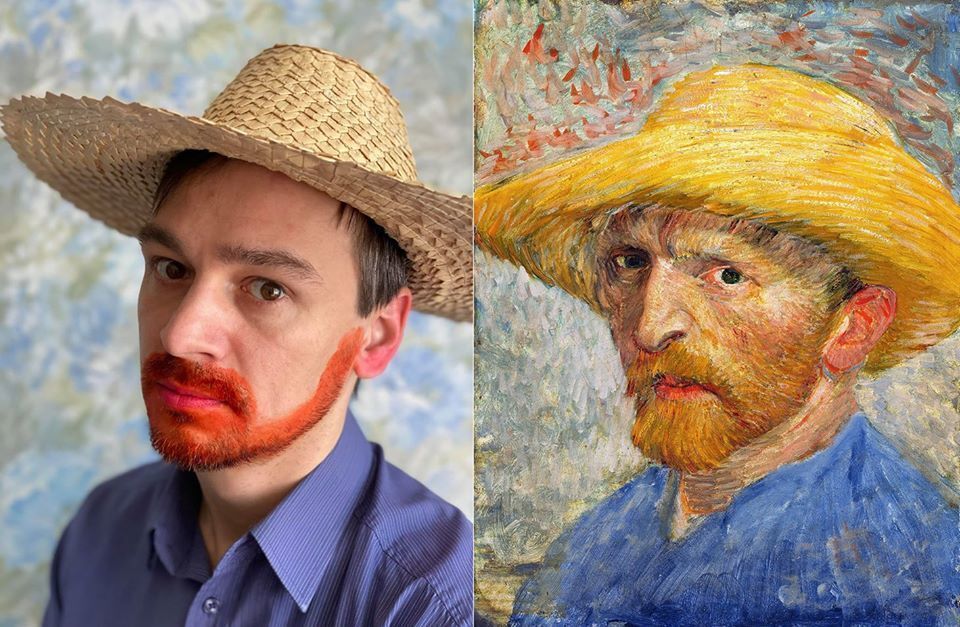 A Russian art project intended to ward off quarantine blues has become a viral sensation on Facebook, as pent-up Russian speakers from across the globe reenact paintings to pass the time amid the coronavirus pandemic.

Called Izoizolyacia — roughly meaning “Art Isolation” — the Facebook group says it’s for people with “limited movement and unlimited fantasy.” It invites members to recreate masterworks, but with one important restriction of its own: use only what you have at home.

In little over a month, the community has grown to more than half a million members. Using household items, food, raided wardrobes and a familiar Russian-inflected sense of irony, members have produced dizzyingly creative remakes of everything from European masterpieces to Soviet agitprop and coronavirus-influenced memes. 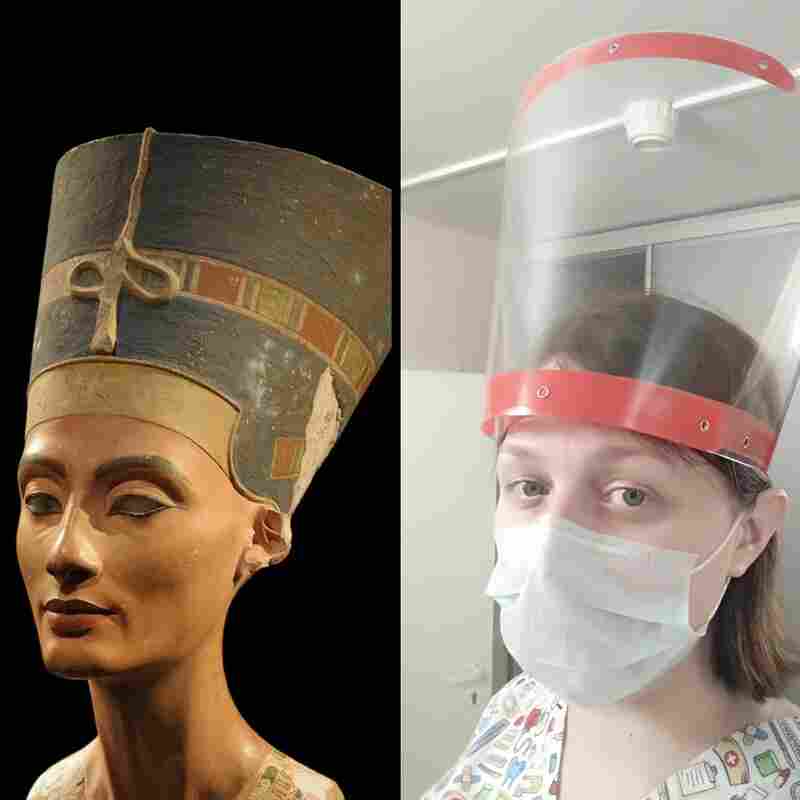 Olga Blytova, an oral surgeon based in St. Petersburg, created a self-portrait inspired by a statue of the ancient Egyptian Queen Nefertiti. Olga Blytova hide caption 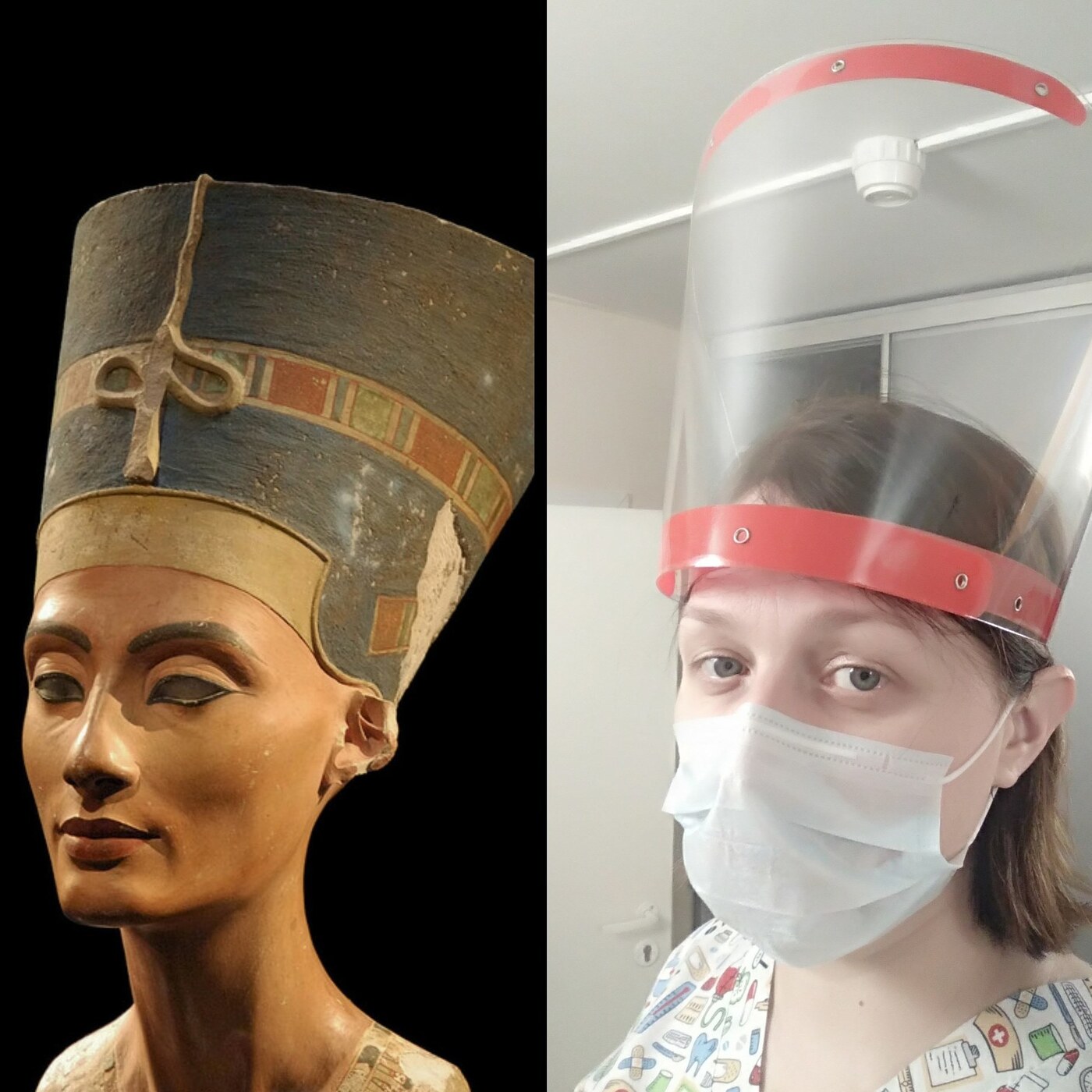 Olga Blytova, an oral surgeon based in St. Petersburg, created a self-portrait inspired by a statue of the ancient Egyptian Queen Nefertiti.

The project started with a few friends in Moscow looking to entertain each other as the city began enforcing self-isolation rules as the virus took hold in April.

“I took a picture of my husband, tagged it Izoizolyacia, and asked a few others to join,” says Katerina Brudnaya-Chelyadinova, 38. Her husband, Dmitry Dolgorukov, donned a hat and painted beard for the project’s first post — a quick riff on Vincent Van Gogh’s Self-Portrait with Straw Hat from 1887.

The post got a few laughs, sure, but there was little sense of what was to come.

Some friends responded. Then more submissions trickled in from across Russia. Soon posts were coming in from Ukraine, Georgia, Israel, Western Europe, North America and beyond.

“We did nothing. It was completely organic,” says Brudnaya-Chelyadinova. She quickly assembled a team of volunteers to help curate an online exhibition that defies national boundaries but shares a certain cultural affinity. 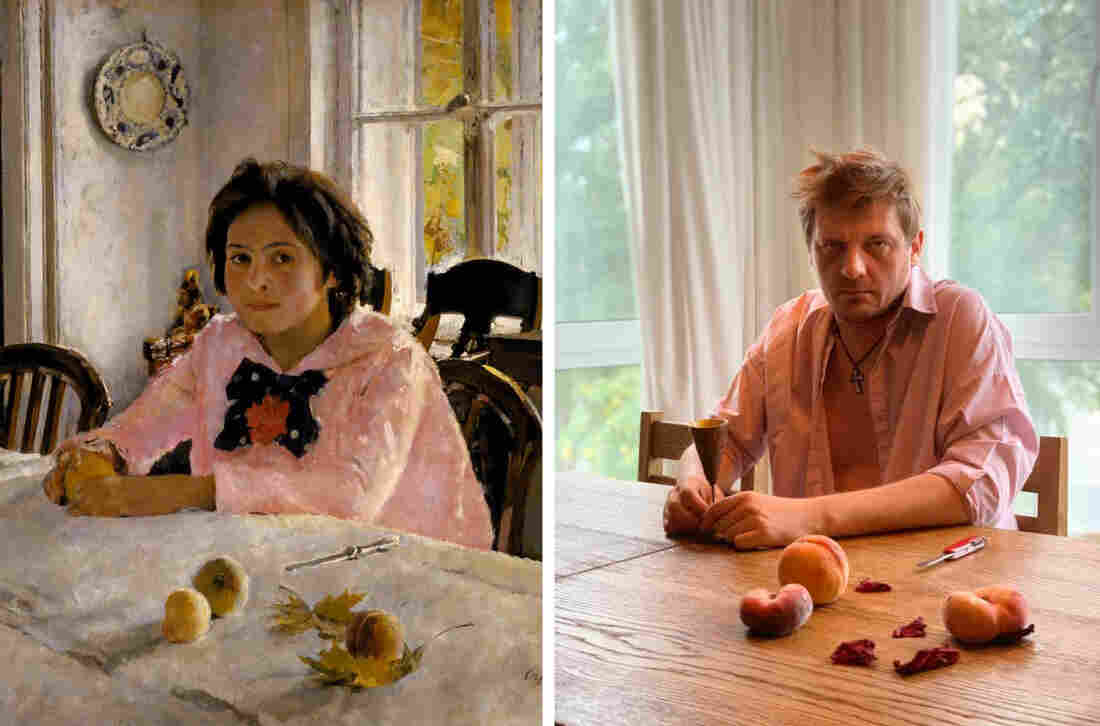 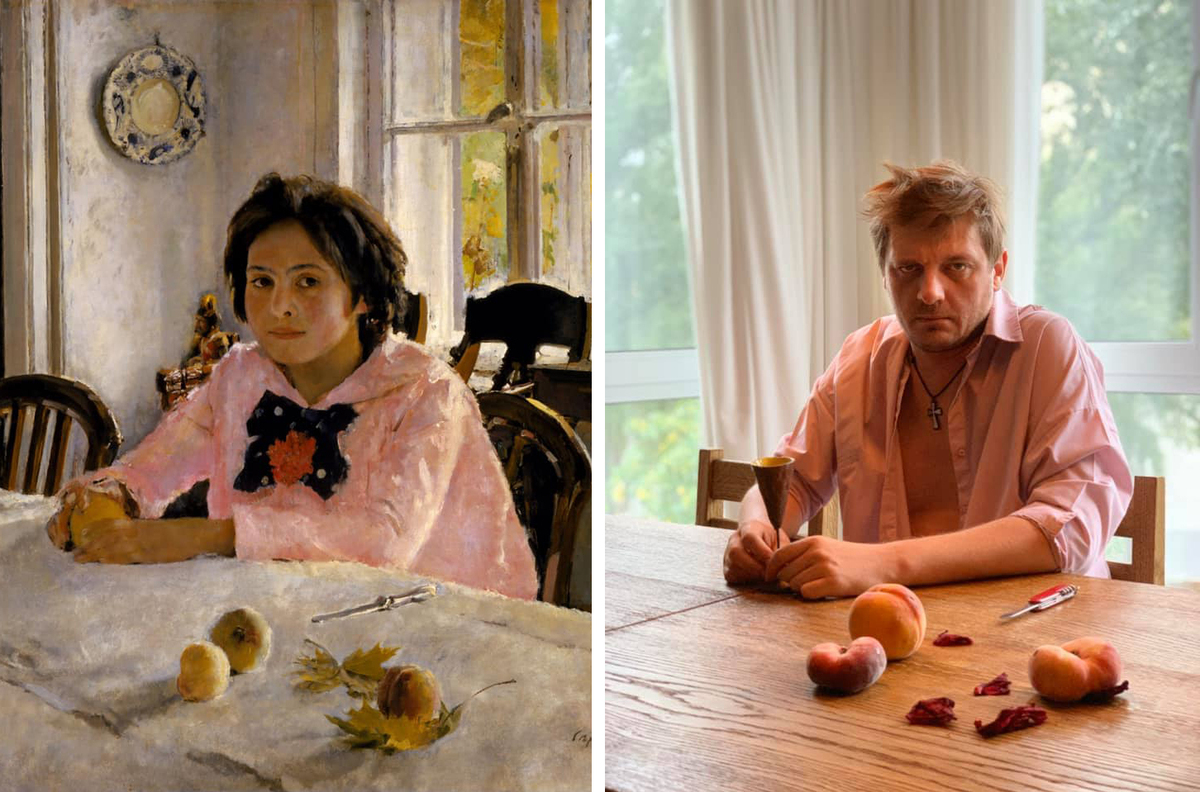 Sasha Nikolov, a resident of Kyiv, Ukraine, makes for a surly stand-in for Valentin Serov’s iconic Girl with Peaches.

It’s a stark departure from the sort of Russian global influence that’s been grabbing negative headlines in recent years. “Art Isolation” (welcomely) stretches across borders as Russian speakers holed up in different parts of the world share creations — and jokes — that have clear broader appeal.

But at their core, the creators tap into a Russian-influenced talent for laughing and creating through hard times — at the deprivations of the Soviet Union, the chaos that followed its demise and now the evolving restrictions of our coronavirus age.

“It’s hard to put a finger on it but it’s a certain Russian know-how — funny, ironic and depressing all at once,” says Kira Yastrebova, 36, a group member whose family moved from Moscow when she was 11 to a tight-knit Russian immigrant community in a suburb outside Minneapolis. 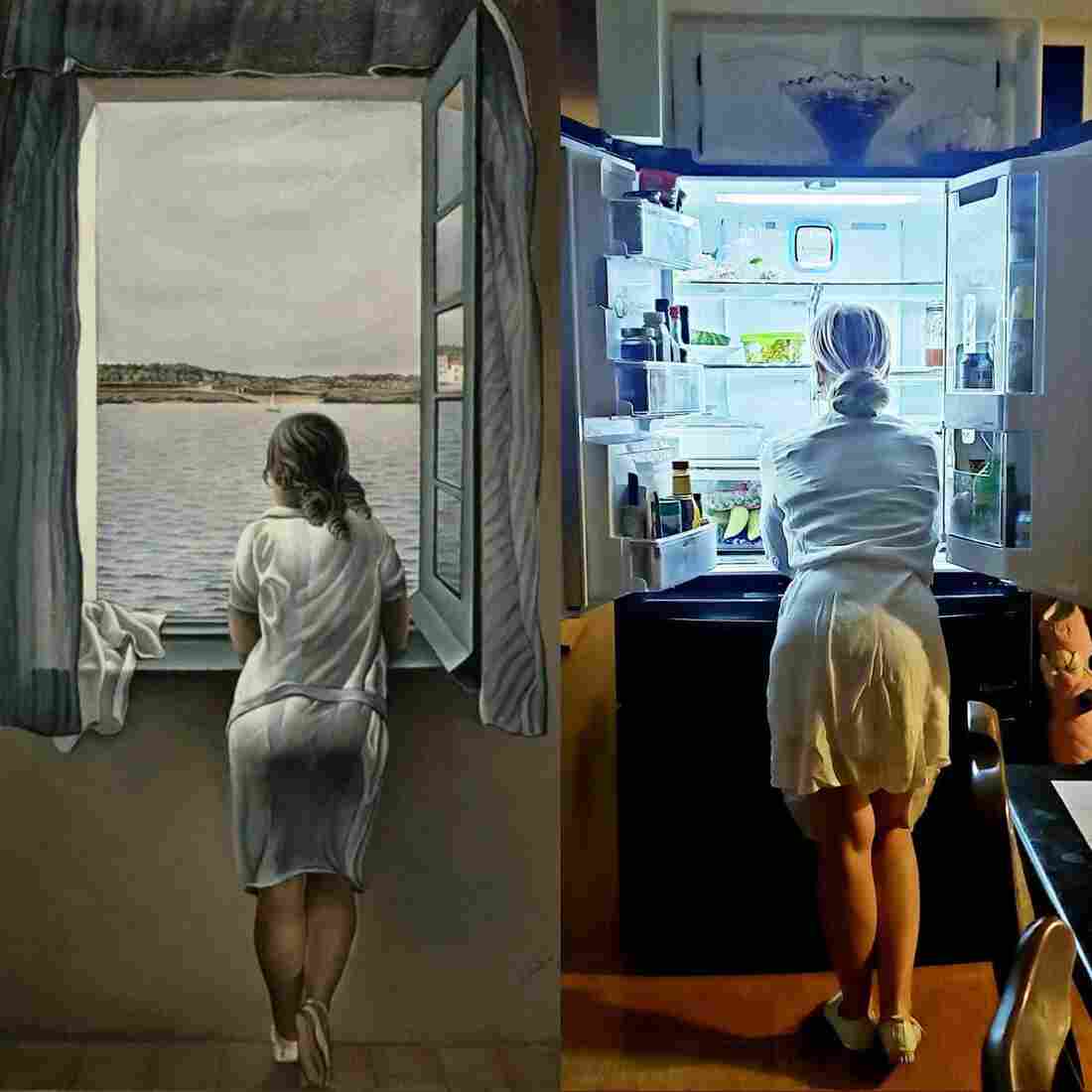 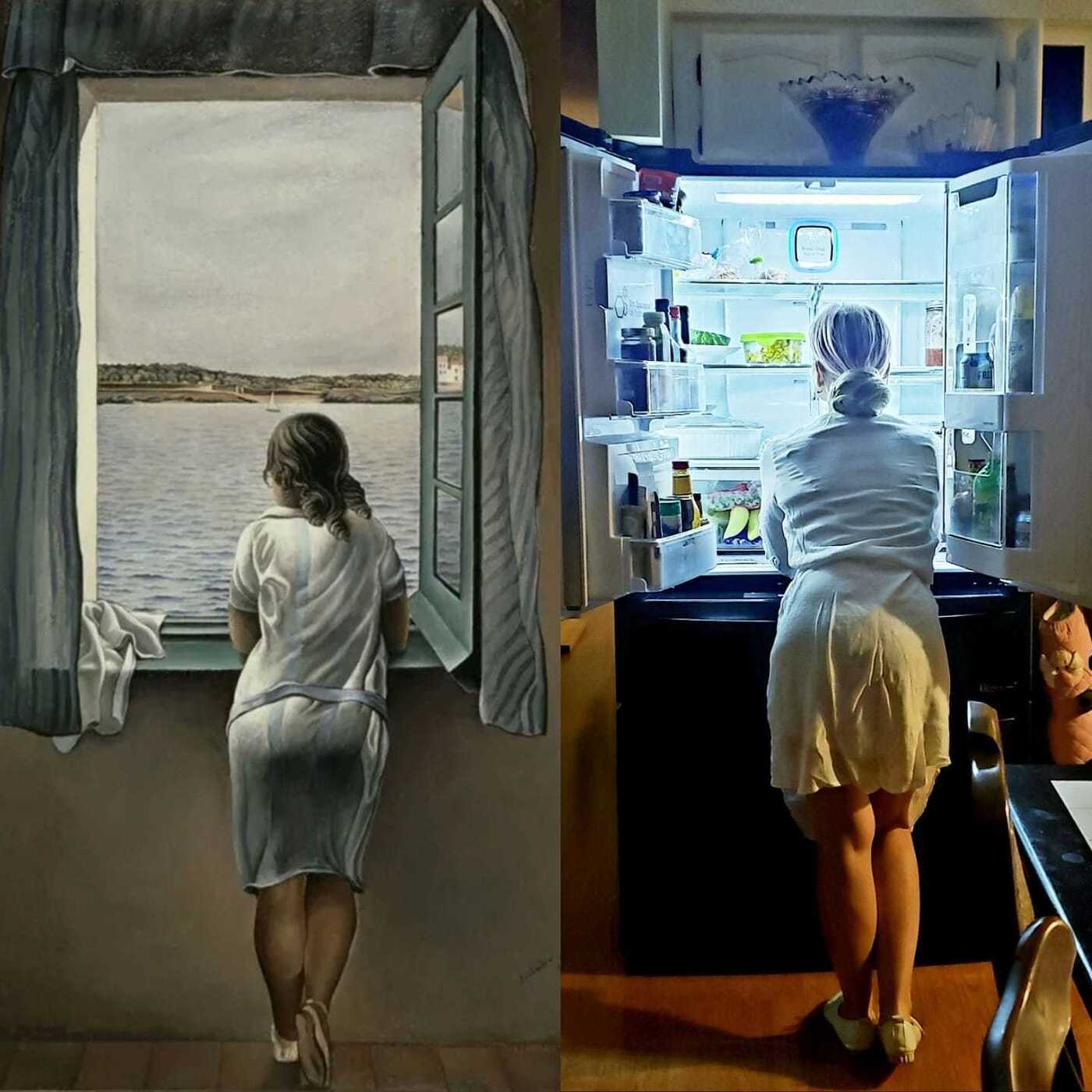 Her submission: A remake of Salvador Dalí’s 1925 painting, Figure at a Window. Only, her refrigerator substitutes for Dalí’s lush water view.

“Everyone’s commenting that ‘this represents the sentiments of our times!’ ” Yastrebova tells NPR. “To be honest, I didn’t have that deep a thought. I just didn’t have a window.”

Indeed, the best entries move beyond clever art cosplay and tap into the zeitgeist.

“I’d just gotten off a six-hour shift,” says Olga Blytova, 44, an oral surgeon in St. Petersburg, Russia, who — with a tilt of her medical shield upward — transformed herself into ancient Egypt’s Queen Nefertiti and paid tribute to medical workers fighting the virus. “To each their own crown,” she wrote in an accompanying post.

Others joke on the familiar shortages — like toilet paper — or the reality of simply being cooped up for too long.

“I was bored and I had peaches,” says Sasha Nikolov, a resident of Kyiv, Ukraine, who makes for a surly stand-in for Valentin Serov’s Girl with Peaches from 1887.

Then there’s the all-too-familiar theme of parents trying to keep children entertained at home. 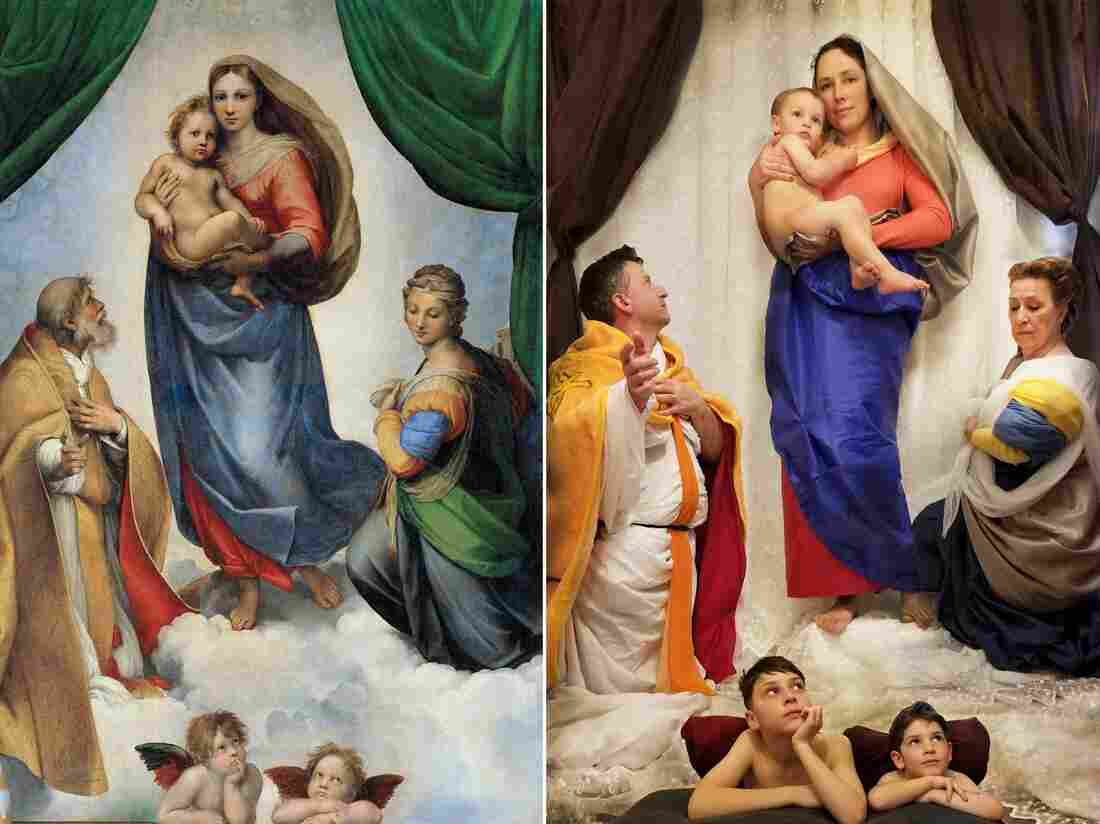 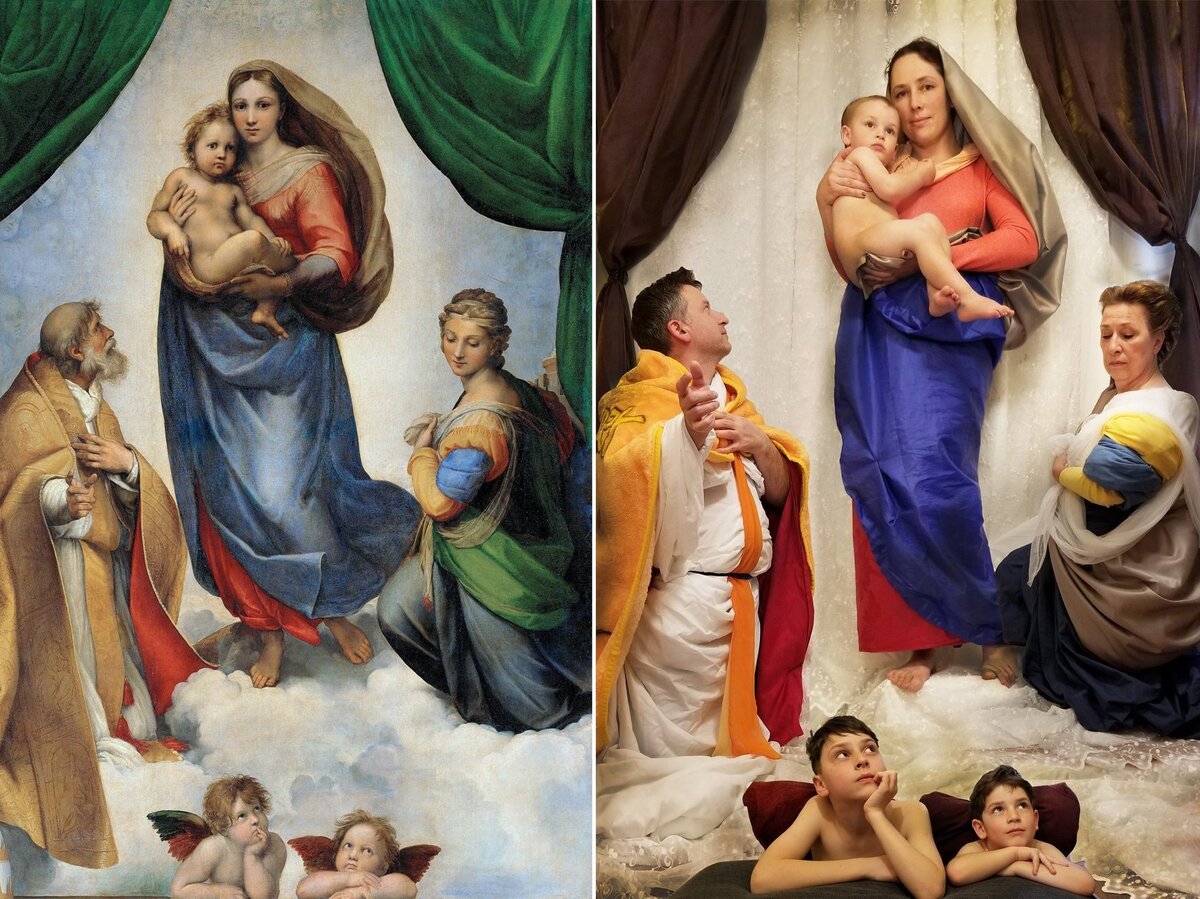 “My mother came up with the idea while stuck here because of the travel bans,” says Nikolaenko. “She noticed the picture had the same number of people as we had in our family.”

Nikolaenko adds that her 11-year-old son, Timofei, “has been amazed by the response,” now at more than 79,000 likes.

In the age of Instagram, it’s no surprise that visual artists, celebrities and influencers have also gotten in on the act. But it’s average people — and ordinary bodies — who often generate the most laughs and, often, likes.

“I’m not a very visual person,” says Karina Terekhova, 49, an IT specialist who moved from her native St. Petersburg to Helsinki, Finland, in the 1990s.

She wanted to participate and — playing by the rules — “make do with what I have.”

Karina Terekhova directed her husband Vasily Simonenko to remake a Soviet proletarian work poster of their childhood. The poster reads, “Let Monday come fast and then it’s back to work!”

That included her husband of 20 years, Vasily Simonenko. “It was bothering me. His face? Where had I seen it before? He reminded me of something,” Terekhova tells NPR.

A quick search on Google and she had her answer. She soon coaxed Simonenko to strip to a T-shirt and strike a sporty pose from a Soviet work poster of their childhood.

“Let Monday come fast and then it’s back to work!” reads the poster’s slogan — a perfect mashup of Soviet agitprop and today’s pandemic-induced financial anxieties.

“At first my friends said, ‘Why are you reposting that old poster?’ And I said — ‘Look again! It’s my Vasily!’ ” says Terekhova. “It’s magic. Sometimes even I can’t tell it’s him.”