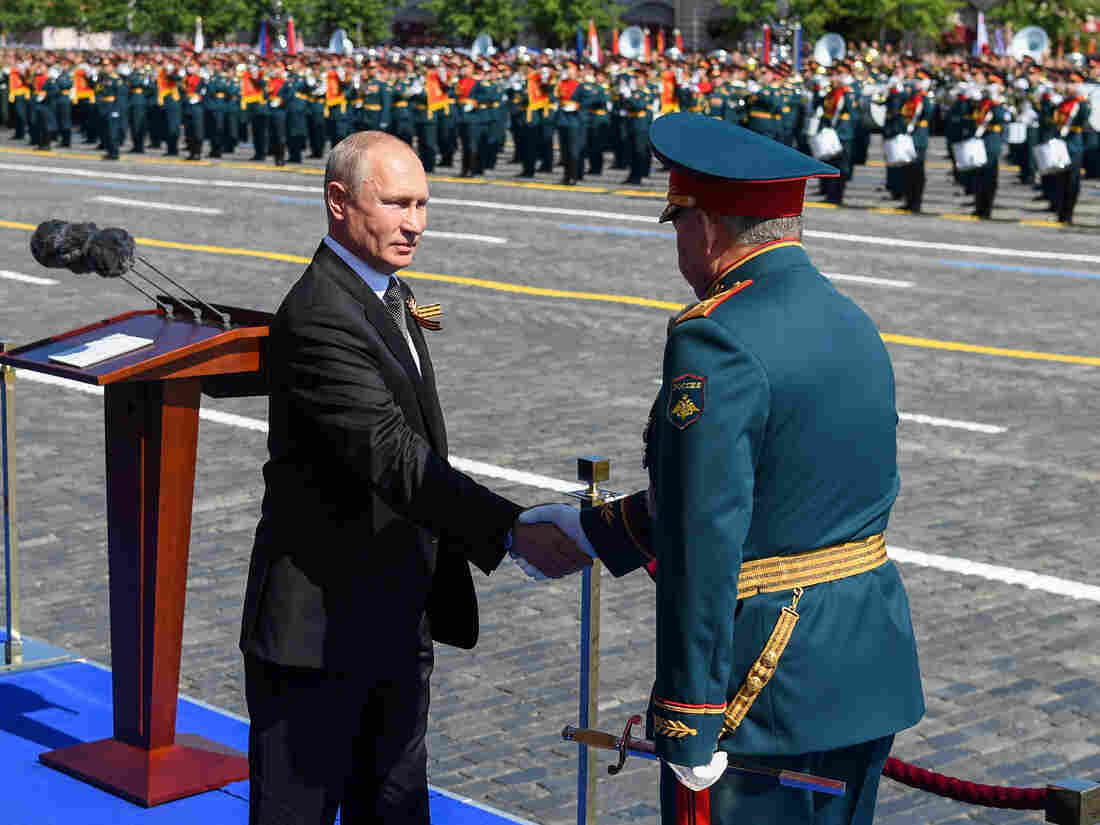 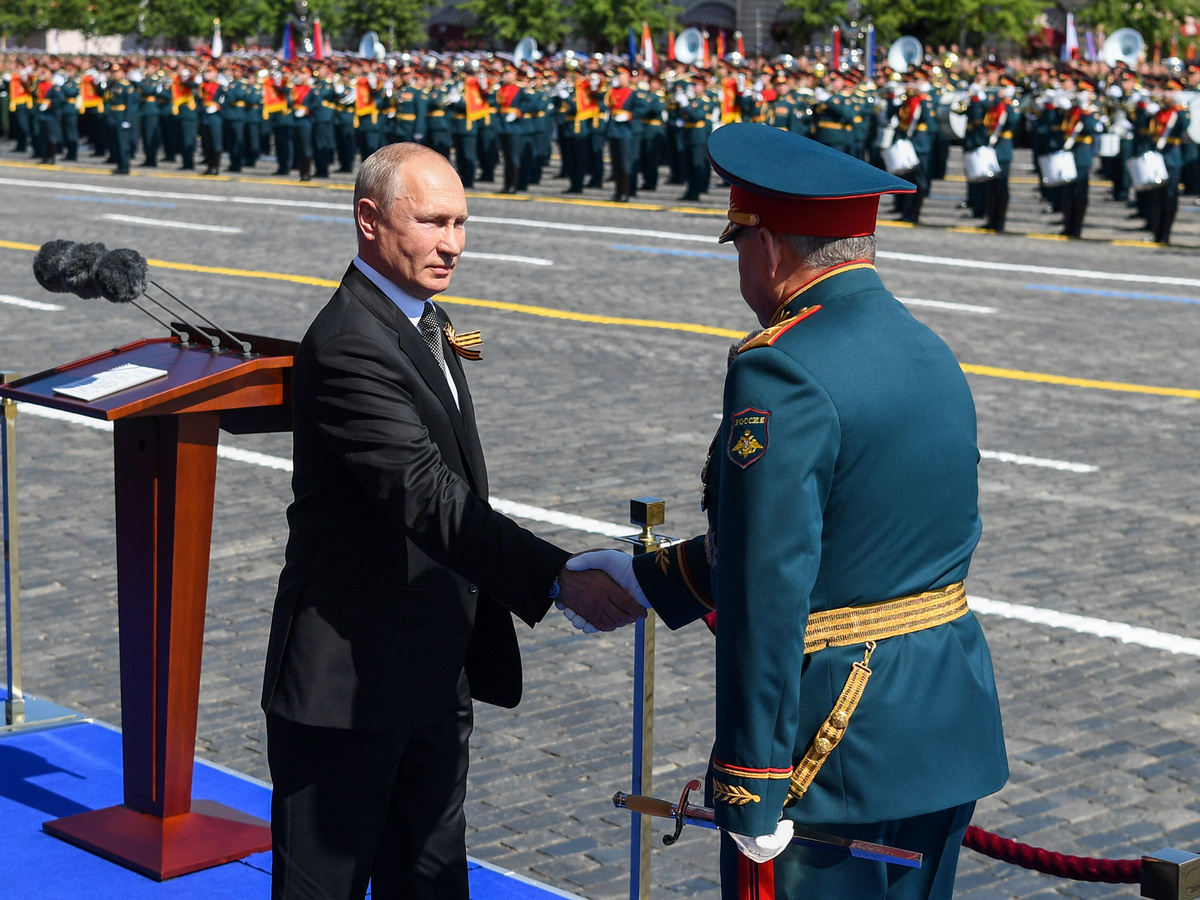 A newly unveiled World War II monument towered behind Vladimir Putin as the Russian president made a final pitch for a July 1 vote on a raft of constitutional changes that include a ban on same-sex marriage and an affirmation of Russians’ faith in God.

“We are not just voting for amendments,” Putin said on state TV Tuesday. “We are voting for the country in which we want to live, with modern education and health care, reliable social protections and an effective government accountable to the public.”

Putin said the proposed changes will cement Russians’ values into their constitution. What he didn’t mention was the amendment that will reset his term limits — allowing him to stay in power until 2036, when he’ll turn 84.

Putin’s political future has been a subject of intense speculation ever since he won a fourth term in 2018. The Russian constitution currently permits a limit of two consecutive presidential terms, six years each. At the completion of his second term, Putin stepped aside as prime minister and let a protégé, Dmitry Medvedev, serve one presidential term.

Having first been elected president in 2000, Putin is laying the groundwork to become Russia’s longest-serving ruler since Peter the Great three centuries ago.

Putin’s plan to hang onto power took shape in January, when he abruptly fired his cabinet and announced the need for sweeping constitutional changes. Exactly how they might affect his own rule became clear only in March, when a senior lawmaker proposed an amendment making it possible for Putin to run two more times.

Both houses of parliament, Russia’s 85 regional assemblies and the Constitutional Court all rubber-stamped the package of amendments. But Putin insisted they also get the blessing of the Russian people in a national vote.

“To stay in charge, Putin needs the support of the majority, even if it’s a formality,” writes Andrei Kolesnikov, a senior fellow at the Carnegie Center Moscow. “Putin is using the public vote to make ordinary people his accomplices in extending his rule and sanctioning the domination of an ultraconservative ideology.”

Putin planned for the vote to take place on April 22, followed by a giant military parade on May 9 marking the 75th anniversary of Nazi Germany’s defeat in World War II. As the coronavirus pandemic hit Russia, Putin reluctantly postponed the vote, and then the parade.

“He was forced to yield to the power of the virus,” says Masha Lipman, a political analyst in Moscow. “Putin never concedes to pressure. I think this is a unique situation.”

Even though Russia has the third-highest number of coronavirus infections after the United States and Brazil, regional leaders loosened lockdown restrictions this month. Putin’s Victory Day parade was rescheduled for June 24, and the constitutional vote for July 1.

The two events are linked because both aim to strengthen Putin’s legitimacy, says Alexander Titov, a historian at Queen’s University Belfast.

“There is very little beyond the victory in World War II which unites Russians,” says Titov. “Putin’s whole idea is to bring back continuity between old czarist Russia, the positive aspects of the Soviet Union and blend it in together with his own rule.”

Originally Putin had invited President Trump and other Western leaders to the Victory Day parade. In the end, the dignitaries who attended hailed mostly from former Soviet republics.

“It must be hugely disappointing for Putin that this great anniversary — which also was supposed to be a kind of crowning of him as a president for life — turned into a very small-scale affair,” says Titov.

The day after the parade, a week of early voting began on Putin’s ballot measure. Voters are being asked to approve a package of 206 constitutional amendments with a single yes/no answer.

The Central Election Commission says all necessary health and safety precautions are being taken at polling stations, with temperature measurements of voters and the availability of face masks and gloves.

Pianist Denis Matsuev, a regular at New York’s Carnegie Hall, appears in one such ad.

“Our culture and our language are what make us strong, unique and unite us,” he says. “The constitutional amendments will preserve and protect our unique cultural code.”

The Kremlin has emphasized that the amendments will strengthen Russia’s sovereignty, independence and the government’s social obligations to its citizens.

Critics say the vote bundles so many amendments together that its true purpose — securing Putin’s reign for years to come — is being obscured. They say that six days of early voting, electronic balloting in two regions and the lack of independent observers open up the possibility for widespread fraud.

In a video posted to social media, opposition leader Lyubov Sobol called the vote a “disgrace.”

“If you think Putin is our national leader and should rule for more than 20 years, then why not just call a referendum with one question: ‘Do you agree that Putin should have a fifth term?'” she says. “But they didn’t call one.”

The fact that Putin is going through the trouble of a national vote is a sign he’s concerned, says Lipman.

“It is very important to him to have this popular endorsement, even if it is a farce, even if it is a travesty of popular will,” she says. “He produces the impression that he is no longer as confident as he used to be, and maybe this has to do with the decline in public approval and trust, combined with the fact that the Russian economy is not in good shape, to say the least.”

On Monday, a state-run polling agency published an exit poll showing 76% of voters who had cast ballots early supported the amendments.

For the Kremlin, the result of the vote seems to be a foregone conclusion. Copies of the constitution — complete with all the new amendments — are already being sold in Moscow bookstores.