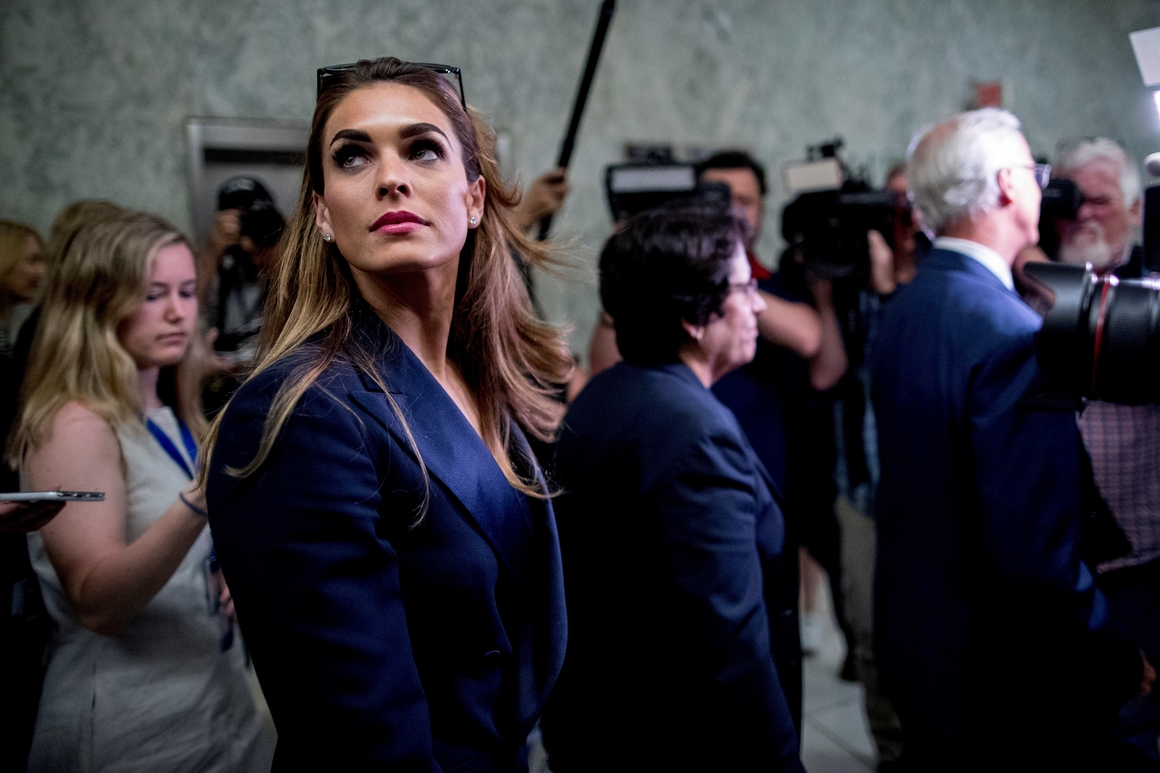 Hicks is not a scheduler, although she now works from the scheduler’s office in the West Wing, and she’s not a communications director, even though that was her old job. Now her responsibilities straddle both the management of the president’s daily calendar and the crafting of messaging based on news of the day, although it is quick to change. But most important, she has been a key figure in encouraging Trump to be front and center at briefings and events during the coronavirus response, viewing him as the voice that could break through and capture the most attention.

Trump’s decision to speak at almost every coronavirus task force briefing had the desired effect initially, leading to a bump in his approval ratings and a greater sense among Republicans and his base that the White House was taking major, if belated, steps to combat the pandemic. The president grew to look forward to the evenings when he could garner high TV ratings during the televised briefings, spar with reporters and defend his record.

But those appearances have run into trouble. After the president peddled scientifically dubious theories and dangerous treatments, like the injection of disinfectants, task force members held no briefings over the weekend.

Aides and close allies have begun to question the decision to give him so much airtime, according to interviews with a dozen current and former senior administration officials and Republicans close to the White House. And critics charge that the White House’s overwhelmingly positive messaging — on reopening the economy, testing, the manufacturing of supplies — is belied by reality.

“Look, the briefings were clearly created and designed to try to fix the president’s political health and had very little to do with public health,” said Robert Gibbs, the White House press secretary under President Barack Obama who now serves as senior counsel for Bully Pulpit Interactive Media. “Even before Thursday’s disinfectant fiasco, the level of misinformation and contradictory messaging at a moment when the country needs clarity has been jarring and dangerous.”

The White House press shop says the president has made himself available more than most leaders to take questions, even in tough times — a move that should be applauded.

The “president felt it was important in these challenging, difficult times to be honest and speak directly to the American people about the challenges we face,” said Hogan Gidley, the White House principal deputy press secretary.

“A lot of other people would not have done that, but it is a testament to his leadership that he was the one who wanted to deliver that news, so he could be honest with the American people but also offer a message of hope.”

Hicks reentered the West Wing just as chief of staff Mark Meadows has tried to find his place weeks into the job, and as he overhauls the press and communications teams that Hicks once oversaw.

For all her eagerness to be back in thick of things, Hicks didn’t expect to start work in the middle of a pandemic.

She had de-camped in 2018 from Washington to Los Angeles, where she worked as the chief communications officer for Fox. Friends say she did not love living in Southern California, wanted to be closer to her family on the East Coast and, most important, missed the pace and dynamism of the White House, where top aides are always in the middle of sweeping moments in history.

So, Hicks accepted a job as a counselor to the president, working within the office of Jared Kushner, the president’s son-in-law and senior adviser, where she intended to travel and offer advice heading into the November election.

The public announcement of her return came at a heady moment in Trump world. Aides felt confident about the prospects for a second term after impeachment, with a strong economy and a bump in the president’s approval ratings. Trump also traveled to Davos and India, acting a president on the world stage.

By March 9, when Hicks officially joined the White House, the severity of the pandemic had become clear. She quickly realized the whole government needed to zero in on the virus. She started to attend the daily task force meetings to offer advice on strategy and the best way to respond to the story of the day and communicate with the public.

Quickly she began to oversee the president’s schedule and focus on his events. She advocated for bringing business leaders to the White House and to the briefings, along with reaching out to groups as diverse as drug manufacturers and religious leaders, and involving the private sector as much as possible. Like the first lady, Ivanka Trump and Kushner, she felt that the entire White House megaphone should be dedicated to the response.

Hicks’s return, current and former senior administration officials say, gave the president a loyal and trusted aide. With her quick-witted sense of humor, she tends to get along with the majority of staffers inside the backbiting White House, and she can deliver advice to the president in an unfiltered way without angering him because Trump trusts her and views her like another daughter or member of his family.