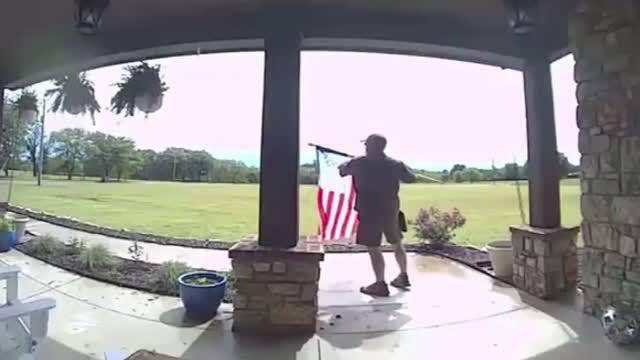 It was a simple gesture, but it brought some people to tears.

An Oklahoma homeowner’s front door video camera caught a UPS driver stopping in his tracks to straighten out an American flag that was snagged on its pole due to wind.

The driver was not identified but the discrete act was all the more touching because it happened on Memorial Day, Fox 23 reported.

Chelsie Ashley, who was identified as the customer, told the station that the UPS driver didn’t know he was being watched and she said she “thought that was so cool, like,  what he was doing when nobody was looking.”

Ashley told the station that the video gained a lot of attention and she was even contacted by a veteran who told her that he cried when he watched the footage.

GET THE FOX NEWS APP

“That made me emotional because its making vets cry. That flag stands for so much, it’s so heavy, and I wanted everyone to know how much we respect our vets. Just something uplifting and positive right now because of everything going on,” she said.