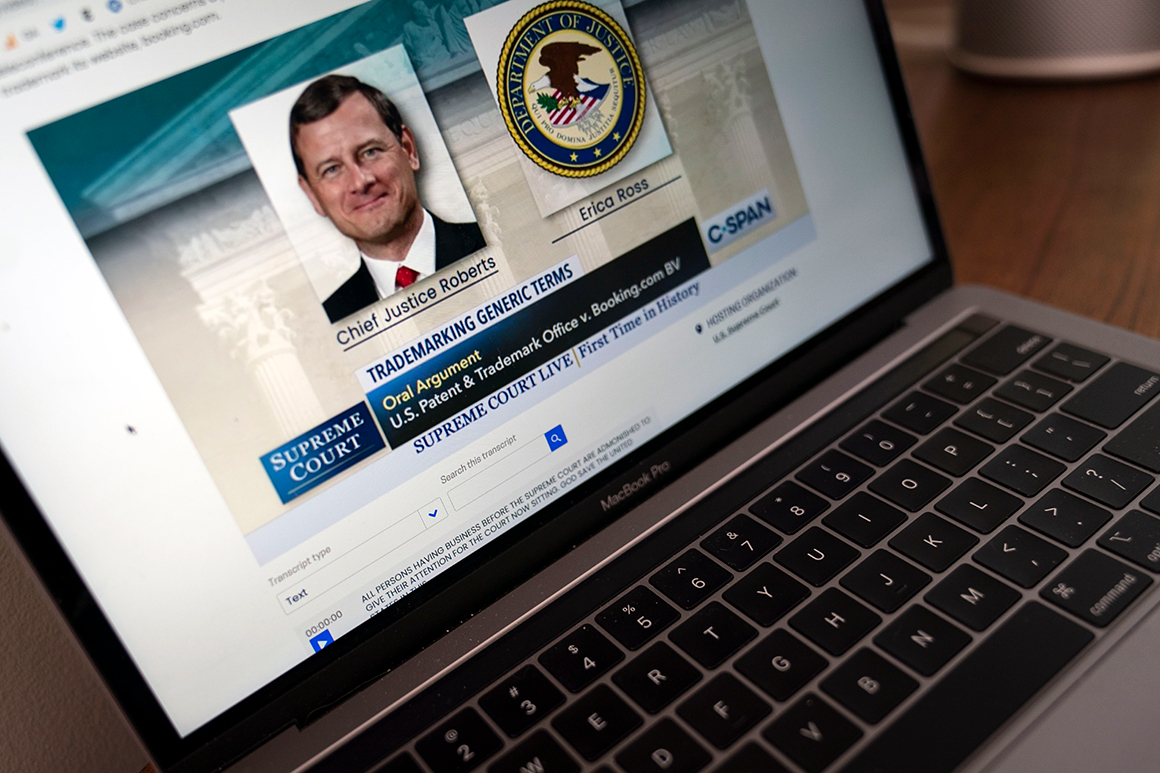 The court appeared to have deliberately selected the lower-profile case — involving the website Booking.com — for the first remote-argument outing so that any glitches could be ironed out before attention-grabbing disputes go before the justices later this week and next.

The most surprising development in the first case was not a glitch but a rarity: Justice Clarence Thomas asked questions of the lawyers on both sides—just the third time in more than a decade that he has interrogated lawyers appearing before the court.

Thomas didn’t indicate why he was departing from his usual silence, but the protocol for the telephone hearing involved Chief Justice John Roberts calling on all the justices individually to ask questions — something he does not typically do at in-person arguments. Thomas may have decided his silence would be too conspicuous if he affirmatively passed when called on.

Thomas’ queries were far from earth shattering and largely tracked with the rather mundane issues raised by his colleagues.

“Could Booking acquire a vanity number, 1-800-BOOKING, for example, that is similar to 1-800-PLUMBING, which is a registered mark?” Thomas asked Justice Department lawyer Erica Ross.

No major logistical problems plagued Monday’s arguments, but a few of the issues more typical of conference calls with large numbers of participants reared their heads. When Roberts worked his way down the seniority list to Justice Sotomayor the first time, she did not immediately respond, perhaps because her phone was muted.

After another pause, she surfaced. “I’m sorry, chief,” Sotomayor said, without offering any explanation for her initial silence.

Ross, who was representing the Patent and Trademark Office, also fell mute for a short time after Roberts called on her to begin her rebuttal argument. On the second call, she also popped up.

“Thank you, Mr. Chief Justice, sorry about that,” she said.

Justice Stephen Breyer, one of the court’s most loquacious questioners, found his voice garbled for a spell at the beginning of one of his forays Monday but even after the line cleared up he managed to go on for another two minutes, posing a four-part question to Lisa Blatt, the attorney for Booking.com.

“Now, that’s a lot, but I want to hear your answer to those points,” Breyer said as he brought the question home.

By and large, the phone arguments were more stilted than the in-person sessions, because the format prevented crosstalk between justices and prevented them from immediately chiming in to follow up on each other’s queries. The lawyers and justices also sometimes talked over each other because of the difficulty detecting an interruption.

Roberts was more of a taskmaster Monday than he typically is at Supreme Court arguments. Both Ross and the attorney for Booking.com, Lisa Blatt, found themselves repeatedly cut off by the chief with a “Thank you, counsel.” Despite Roberts’ efforts to keep the arguments moving along briskly, they still went over the allotted hour by about 15 minutes

Advocates for more transparency from the court — including live audio of all arguments and even video cameras at arguments — are hopeful that the court will make the audio feed a routine and also weaken its opposition to other methods of broadening the audience for the high court’s argument sessions.

The Supreme Court began adjusting its operations in March due to the spreading coronavirus outbreak and closed to most visitors on March 12. Four days later, the court announced it was postponing two weeks of arguments indefinitely. Just over two weeks later, it announced that none of the roughly two dozen cases set for argument in March and April would be heard as scheduled.