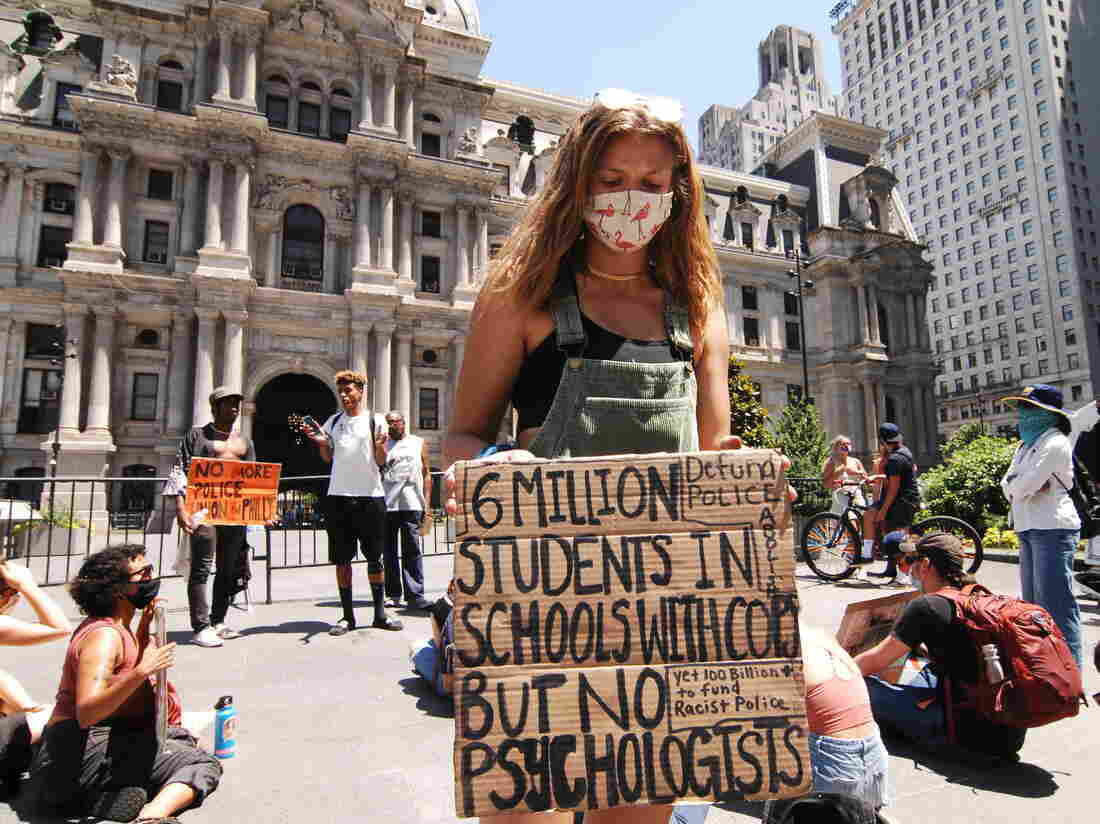 Youth from across Philadelphia gathered in front of City Hall June 9 to protest police brutality and voice their concerns and vision for the future. According to recent research cited by the CDC, nearly half of all Americans between 18 and 29 report symptoms of anxiety or depression. Cory Clark/NurPhoto via Getty Images hide caption 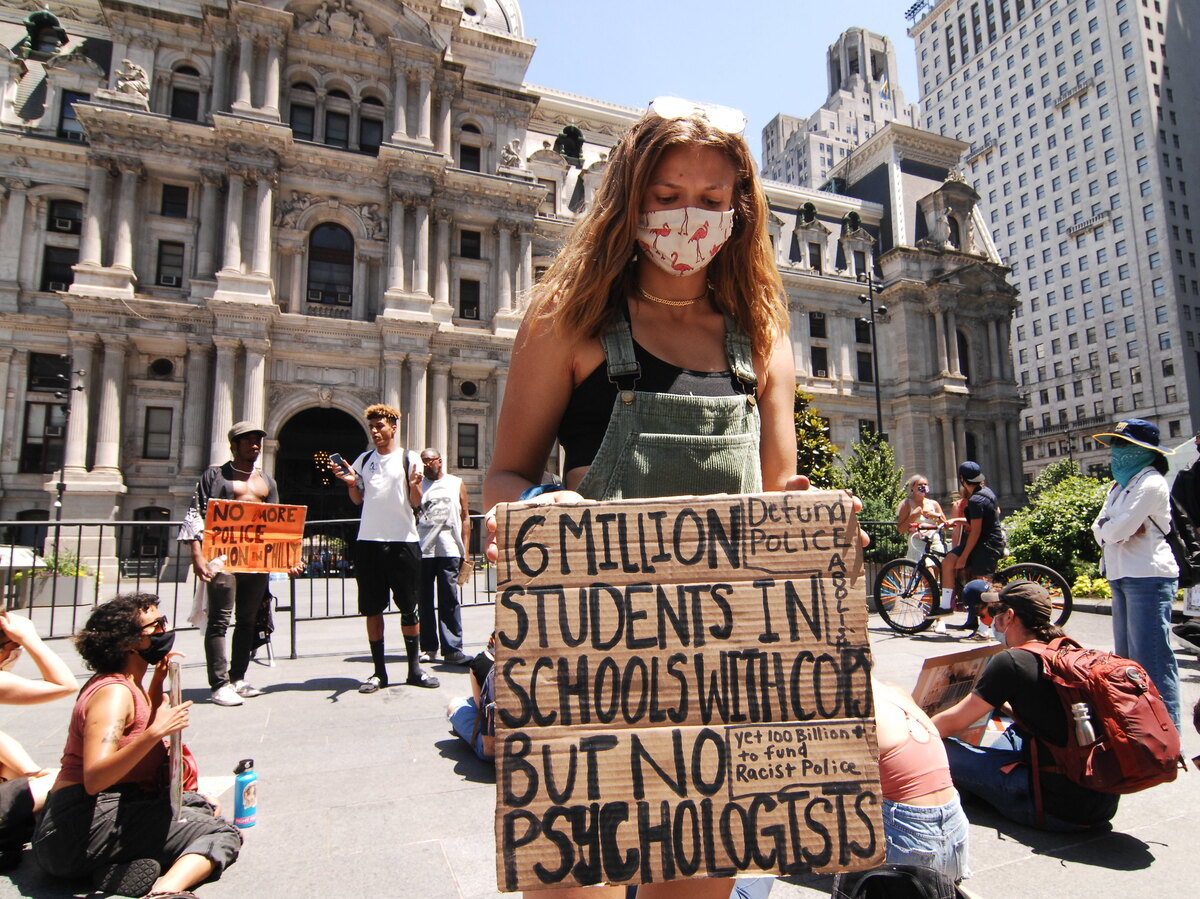 Youth from across Philadelphia gathered in front of City Hall June 9 to protest police brutality and voice their concerns and vision for the future. According to recent research cited by the CDC, nearly half of all Americans between 18 and 29 report symptoms of anxiety or depression.

Audrey just turned 18 and relishes crossing into adulthood: She voted for the first time this year, graduated high school, and is college-bound next month. The honors student typically wakes up “a bundle of nerves,” she says, which has fueled her work volunteering, playing varsity sports, and leading student government.

But for years, she also struggled with anxiety, depression and obsessive compulsive disorder — all of which drove her to work harder.

“I was spending so much time on my homework, I felt like I was losing my friends — so my thoughts would race over and over again about my friends,” says Audrey. “And then I would have the difficult thoughts about suicide and some scarier stuff.” (NPR agreed to use only her first name to protect her medical privacy.)

Audrey’s psychological struggles landed her in mental health treatment last fall. There, she says, the coping skills she learned gave her perspective on quarantine: “I know all about how seeing friends and seeing people outside — and social interaction — is vital for survival.”

There is a simmering tension between young people’s desire to gather socially, and the growing threat from the novel coronavirus in the United States. The virus is infecting more people in their teens and 20s than earlier in the pandemic, and that’s contributing to outbreaks, especially in states in the South and West. As a result, public health officials are imploring young adults to limit social contact and take precautions to help protect their more vulnerable elders. But many young people see continued social isolation as a much greater risk than COVID-19 to their own mental health.

It’s not that Audrey isn’t worried about the pandemic; in fact, confirmed cases of the coronavirus are spiking in her hometown of Charlotte, N.C. So Audrey wears masks, washes her hands, and stays 6 feet from friends. But for her generation, she says, infection isn’t the primary threat.

“A lot of people are calling attention to coronavirus because it’s right in front of us,” she says. “But at the same time, teens’ depression rate — it’s a silent threat.”

The health risks of infection differ by generation. For many young adults, life lived at a social distance, with a lack of peer support, comes at a high cost to mental health. The Centers for Disease Control and Prevention says nearly half of people between 18 and 29 report feeling symptoms of anxiety or depression. That’s twice the rate for their parents, and three times higher than their grandparents. Suicide is the second leading cause of death for people under 35.

Yet somehow, says Audrey, that’s not talked about as much.

“We haven’t seen the government or adults as passionate about the things we really care about, like mental health and climate issues,” she says.

It might be tempting to think that FaceTime and Zoom provide substitutes for in-person social outlets, especially for a generation of digital natives who grew up with smart phones. But, therapists say, talking by small screen offers no replacement for a calming hug, and can miss the subtleties of a compassionate expression.

Audrey’s complaint is a common refrain among the adolescent and young adult patients psychologist Lisa Jacobs counsels. It is not that they aren’t concerned about the risks of COVID-19, she says; it’s just that their risk calculations differ.

Jacobs says many of her young patients complain older generations failed to address the young people’s fears — of school shootings and climate change, for example.

“After not being protected, after not being taken seriously, they were asked to take extreme measures to protect other groups and to put themselves at risk by doing so,” Jacobs says.

There is a biological basis for young peoples’ need for socialization. Scientists say bonding isn’t a luxury; it’s critical for development.

Young brains need social connection to feel secure about their identity and place in the world, says Gregory Lewis, who studies the neurobiology of social interaction at Indiana University.

“We expect as a human being to have other people there to share the stressful times and to be our backup, and when they’re not there physically, that in of itself tells our nervous system you’re in a dangerous environment because you don’t have these people here,” he says.

That is less of an issue among older adults, Lewis says, who have had more time to develop their social networks — both at work and around their community — and more time to find partners who can help ground them emotionally. By contrast, he says, “younger people are missing a larger percentage of what previously was there to buffer them.”

So the societal challenge, he says, is to find ways to help community members of all ages balance the risks of infection against the need to foster those essential social bonds.